We've heard that the fight against coronavirus is a "war," that we have a "wartime President," and so on.

Interestingly, if we were in an actual war, by law, Medicare doesn't cover war-related costs.

You can find this on the Medicare agency's public website, in a public-facing brochure call "Items and Services Not Covered Under Medicare," 18 pages, PDF here. 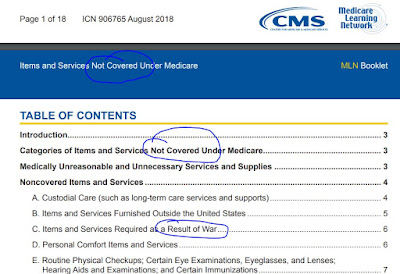 The original source for this is Social Security Act Section 1862(a)(5):


No one would invoke "the war against the virus" under this legal concept.  But if, for example, North Korea dropped a bomb on Seattle as an Act of War, Medicare coverage wouldn't be available.  (Such an event might lead to Congressional amendment, though).