I'm not an attorney but it is interesting to watch the ebb and flow of DOJ investigations and qui tam cases in the lab industry.   Here's an interesting pair involving Exact Sciences.  I am only providing links to documents easily available via Google. 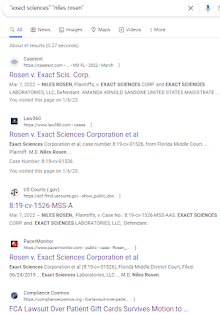 Brief summaries of both actions, from Exact's perspective, appear in Exact SEC filings.  Other links (see picture above) can be gleaned by searching Google for "Niles Rosen" and "Exact Sciences."

While I have not used legal databases to look at other court documents, one document from March 2022 was open access online and involved use of "discovery" while other motions were playing out.  Here or here.

A short article was open access at COSMOS (compliance site), issue October 2022, here.  COSMOS remarks as follows:  "The lawsuit was filed by a whistleblower, 72-year-old retired Florida physician Niles Rosen, against Exact Sciences Corp. (ESC) and its subsidiary, Exact Sciences Laboratories LLC (ESL), which administers Cologuard, a colon cancer screening test.  Rosen alleges that a $75 Visa reward card offered to him and other Medicare beneficiaries as part of Exact Sciences’ Patient Compliance Program was unlawful remuneration intended to induce their use of Cologuard."

A currently open-access issue of Medicare Compliance, October 2022, was on Google from the Berry Dunn website and has a several page article (p 3ff) on the Rosen topic.  Here.  Basically this expands on the sentence just quoted from COSMOS.   It includes the quote, "  'It was a straight up kickback,' contends attorney Marlan Wilbanks, who represents the whistleblower. 'You can't offer cash or cash equivalents to anyone to induce them to use a government service.'  "    The newsletter goes on to quote Exact Science, which "refuted the allegations and asserted, among other things, that the arrangement qualifies for the preventive care safe harbor to the anti-kickback statute and that the complain fails for many reasons..."  They note that, "encouraging a patient to have a medical service that was already ordered by a provider isn't an inducement under the AKS."

Subscription access article on this topic in Laboratory Economics, January 2023.

For years (since 1997) and up to a few years ago, Dr. Rosen was in charge of the contract for managing Medicare's "Correct Coding" edits (e.g. see testimony by Rosen in 2011 here, his title as Contractor Medical Director.)  Another example of a senior Medicare policymaker filing a qui tam case against a laboratory involved Dr. Elaine Jeter and Myriad, and played out to a $9M settlement in 2019.

The Exact Sciences quarterly filing from November 2022 also has a paragraph about a Date of Service rule investigation by DOJ.  This has gone on for several years, and stems from actions at Genomic Health before it was acquired by Exact Sciences.

This exception and others are further defined at 42 CFR 1003.110.  Preventive care, for purposes of the definition of the term Remuneration as set forth in this section and the preventive care exception to section 231(h) of HIPAA, means any service that - (1) Is a prenatal service or a post-natal well-baby visit or is a specific clinical service described in the current U.S. Preventive Services Task Force's Guide to Clinical Preventive Services, and (2) Is reimbursable in whole or in part by Medicare or an applicable State health care program.

Preventive exceptions are also noted on page 2 of a 7-p OIG bulletin to providers.  A law firm essay on safe harbors also notes the preventive services exception.  For example, a provider could give a patient a gift card if they scheduled and received a preventive service, like a mammogram.