On July 19, 2018, it was reported that Myriad entered an OIG settlement for $9.1M.   Myriad remarked it felt the charges were incorrect, but that the settlement would avoid a protracted litigation.
Myriad's stock popped from about $27 to about $29, about 7%, reflecting a market cap bump of about $140M (current market cap circa $2B.)   This suggests that consensus expectations during the period of uncertainty were more negative than the actual resolution was. 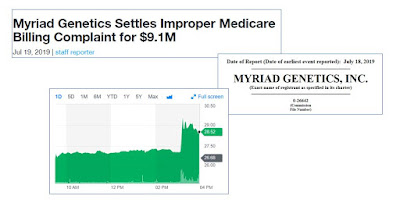 Online documents include, among others, Dr. Jeter's original 24-page complaint about coding choices 10/31/2017.


Did CMS Have Another Route to Effectuate Its Concerns?

Having worked in CMS Part B, it seems there was another route called sampling and extrapolated recoupment.  MAC could have sampled 50 claims from Myriad, randomly from one year of claims, found an error rate (say, each paid $2000 instead of $1000), and extrapolated that error rate in a recoupment across the year of claims.  This is a routine internal maneuver by the MAC and quite rapid.  (It leads into the routine appeals channels upwards towards an ALJ).

It's unclear why this administrative packet of rules wasn't applied, given the level of speed and control a MAC would have had, and given the stated concerns of Dr Jeter in her court documents.

When MAC staff find evidence of potential fraud, the staff shall refer to a Zone Integrity Program Contracting (ZPIC) (see Program Integrity manual, 3.6, here.)  This is the only instruction to MAC staff, there is no additional instruction recommending that the MAC staff stop and file a qui tam suit for themselves.  Dr. Jeter's 24-page case uses the term "fraud/fraudulent/defraud" 14 times. 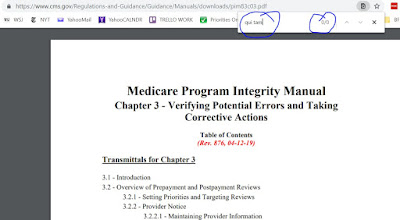 Myriad's stock popped from $27 to $29 on Friday, but settled back near $27 on Monday afternoon.