Feds Release Another Round of Surprise Billing Regulations

After discussions of Surprise Billing that came and went during the Trump Administration years, in December 2020 Congress suddenly passed a major Surprise Billing law, to take effective January 1, 2022.  Accordingly, the Administration has been going through several rounds of releasing implementing regulations so the industry can get ready for changing ground-rules between providers and insurers.

An early round of regulations were released July 13 - here.   See my earlier blogs in July here, September here.

The laws put strict limits on the amount of out-of-network billing and sets both what the patient is responsible to pay and what the insurer will pay the provider as the main payment.   Some appeals and negotiations are possible.

See also a special "No Surprises Act" webpage that's been opened up at CMS.gov, here. 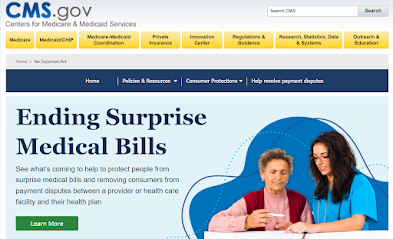 See some early press as follows.
As a pathologist, Table 2 caught my eye.  They assert there are 12,640 active pathologists, 44% had out-of-network claims (when serving inpatients).  Of those doctors, 44% of their claims, were out-of-network.  These numbers were net-net higher than any of the other specialties in the table (E.R. med, radiology, anesthesiology, psychiatry, cardiovascular).  Anyway, it's clear why rules and regs around surprise billing are high on the agenda of the pathology associations.