CMS Releases First Round of Rulemaking on Surprise Billing; Important for Lab Industry

On Thursday, July 1, 2021, CMS released its first round of rulemaking to implement the national Surprise Billing law passed by Congress in December.   It matters a lot to the lab industry, due to the significant ratio of out-of-network to in-network claims for many labs.

There were multiple press briefings, Hill hearings, and news articles about surprise billing in the middle of the Trump administration, but to most people it was unexpected when Surprise Billing legislation suddenly zipped through House and Senate last December.   Now, in mid-summer, HHS is releasing rulemaking to implement the complex law. 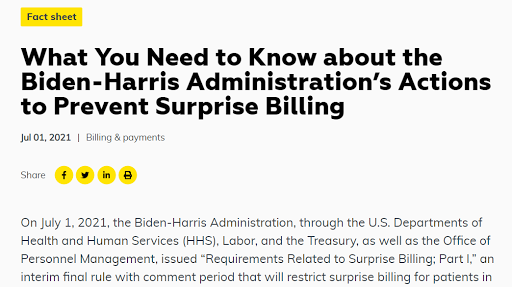 See also:
ADLT Clause in Statute
New to me - it's mentioned in the June 21 CAP letter on the No Surprises Act and elsewhere (eg here), there is a clause that potentially carves out ADLT tests from other ancillary services in laboratory medicine.  See 2799B-2, Balance billing, (b)(3), "The secretary may, through rulemaking, establish a list of ADLTs which shall not be included in "ancillary services" [like other lab and radiology services]."
From the proposed rule:

_____
I noted the press release leads with "Biden-Harris Administration," although they are simply implementing law passed and signed in the previous Congress and Administration.   It's still a step down from the last administration's press releases, which often opened with: "Thanks to the leadership and vision of President Trump..." a new DME rule or other policy was announced.