Many people recognize that nowadays in genomics, Medicare coverage (and principally the MolDx program) precedes commercial coverage.   Often, at conferences we see a slide originally from Health Advances, showing the Medicare coverage for Oncotype Dx in 2017, and the adoption by other payers over the next 4-5 years.

Occasionally I've seen that type of slide for a different product, but not often, and there's no comprehensive study of the onramp to commercial payers.  And we should remember that Oncotype DX in 2017 had a very high multi year cash burn (losses), and a near-monopoly position during that period of payer adoption.   Other companies with proprietary tests, like Foundation Medicine, also showed very high cash burn in the several years leading up to its Roche acquisition.

Here's a headline.  Biodesix First Four Private Payers for its XL2 test.  The text has been covered by Medicare since mid 2019, so that's nearly a four year lag to the first private payers.

Other benchmarks to track include guidelines positioning and e.g. positioning in reference sources like UpToDate or reviews on patient pathways in NEJM.

Overall, Biodesix revenue in 2021 was $54M and operating loss -$40M, holding up the overall rule of thumb that proprietary molecular tests like XL2 require a substantial runway and cash burn period to allow growth.   (During which valuation may vary.  BDSX two-year range for share price is between $3 and $24.) 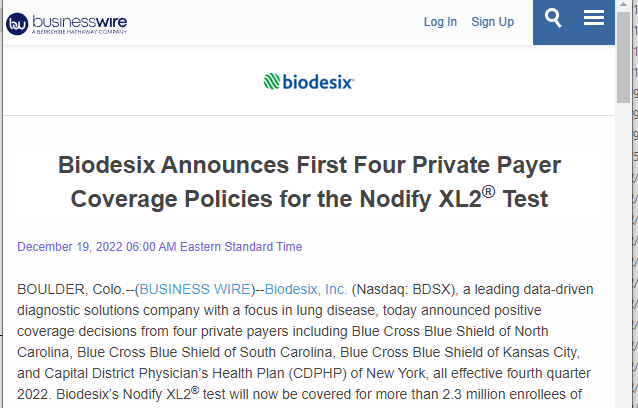