For many decades, Medicare has used a statistical sampling and extrapolation method to impose large recoupments on providers.  For a hypothetical example, if a provider had 10,000 claims for $1M dollars, Medicare might sample 30 claims, find a 50% error rate, and seek a recoupment for 50% of that year's claims ($500,000).

I was also appalled in a case where CMS calculated a 90% confidence band using the simple standard deviation method - but standard deviation are parametric statistics (based on a "standard curve" or "Gaussian curve") and the data was even remotely normal (parametric).  This update seems to at least take account of this problem - noting that in some data sets it may not be possible to use normal methods "due to the use of theoretical assumptions underlying standard statistical methods."

CMS also admits that some methods could result in an "overpayment debt" that is more than originally paid - which makes visible the nonsense created by poor statistical methods.

Now in January 2023, CMS has released a heavily updated version of its statistical investigation guide, which is "Program Integrity Manual, Chapter 8".   Find the PDF here: 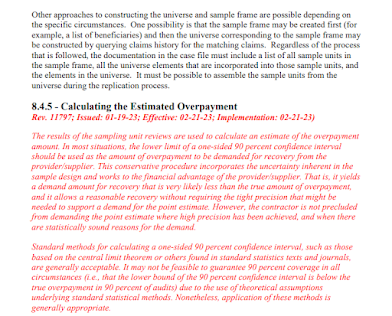 I haven't done extra research, but I noted a law firm report of certain extrapolation changes made in 2018/2019 here.  Medicare Compliance (trade journal) has an open access issue on CMS changes also, here.
A 2020 court case upheld (as had many others) extrapolation, here, Palm Valley v Azar, appeals court. In the case, Palmetto GBA MAC sampled 54 claims of 10,699.  The extrapolation was initially on 29 of 54 claims but some were won on appeal, leaving 25 or 59 claims.  The $81K debt was multiplied to $12.6M.
___
See Q&A via AI at ChatGTP here.