Hold on to your hats. Test panel coding has been a hot topic in the past 12 months.  In November 2018, OIG published a report about potential overbilling of clinical chemistry panels (here).  Also in November 2018, CMS published strict new rules against stack coding of NGS tests (the national Correct Coding handbook; here).

There's even been a court case settled in which documents were filed pivoting on panel coding issues (here).

Finally, MolDx continues to have an older article against code stacking and about panel billing (of either PCR, Sanger, or NGS tests), dating from 2014 (here).  This is called "Test Panel Alert M00101."

Flash forward to October 2019 and MolDx drops a new article that stringently defines single gene versus multiple gene test orders (whether PCR, NGS, etc) and how they should be coding.  MolDx appears set on enforcing the Correct Coding handbook cited above.

The brand new article is called "Billing and Coding: MolDx: Testing of Multiple Genes" (A57503).  Find it on the CMS website here and see a cloud PDF copy here.

The instructions are fairly lengthy, but seem to include using appropriate CPT coding for known panels (e.g. 81432, a ten-gene breast cancer panel), but also covers other situations such as billing for "two or more genes on the same day of service."   Whereas the Correct Coding edits referred above only apply to NGS testing (and require 2 or more genes to be billed with 81479, which most payers and MACs would find manual and cumbersome), this new article A57503 is like the Test Panel Alert of 2014, because it applies to any method, whether NGS or not.

It's unclear if this article supersedes the Test Panel Alert for MolDx, that is, if the T.P.A. will be withdrawn from the website.  If both MolDx articles are in effect, and the CCI edits, it may be a little confusing.  I've put a cloud copy of the T.P.A. article here. 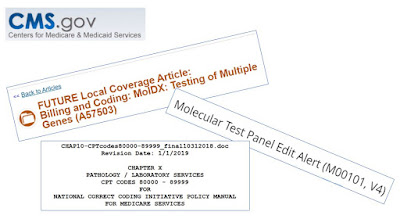 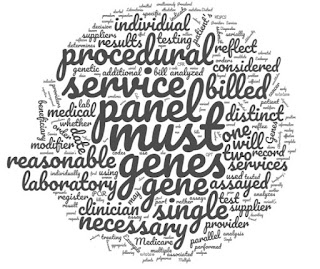 The following information will be effective 10/21/2019 for dates of service on or after 10/15/2019.
A panel of genes is a distinct procedural service from a series of individual genes. All services billed to Medicare must be reasonable and necessary. As such, if a provider or supplier submits a claim for a panel, then the patient’s medical record must reflect that the panel was reasonable and necessary. Alternatively, if a provider or supplier bills for a number of individual genes, then the patient’s medical record must reflect that each individual gene is reasonable and necessary.
For ease of reading the term “gene” when used in this document will be used to indicate a gene, region of a gene, and / or variant(s) of a gene.
Genes can be assayed serially or in parallel. Genes assayed on the same date of service are considered to be assayed in parallel if the result of one assay does not affect the decision to complete the assay on another gene, and the two genes are being tested for the same indication. Genes assayed on the same date of service are considered to be assayed serially when there is a reflexive decision component where the results of the analysis of one or more genes determines whether the results of additional analyses are reasonable and necessary.
If a laboratory assays two or more genes in a patient in parallel, then those two or more genes will be considered part of the same panel. A panel constitutes a single procedural service, so one HCPCS codes must be submitted for the panel. If the laboratory assays genes in serial, then the laboratory must submit claims for genes individually. The order by the treating clinician must reflect whether the treating clinician is ordering a panel or single genes, and additionally, the patient’s medical record must reflect that the service billed was reasonable and necessary.
Two examples:
Single Service Example: A clinician orders 5 specific genes associated with breast cancer. The laboratory analyzes the 5 genes for common mutations using polymerase chain reaction. All 5 PCR procedures are started prior to the results of any one PCR procedure being known. The results are signed off on simultaneously, and all 5 results are sent to a clinician.
This would be considered a single procedural service, a single 5 gene panel, and it must be billed as such. This single panel must be reasonable and necessary to be billed to Medicare.
Multiple Distinct Procedural Services Example: A clinician requests that genes associated with early onset colorectal cancer be analyzed in a patient. The clinician orders stepwise reflex testing where a negative or positive result in one gene determines whether additional analysis on other genes will be performed or what that will be.
Each gene assayed represents one procedural service, so if more than one gene is analyzed, then multiple procedural services may be billed in some patients for whom reflex testing goes beyond the first gene. Each gene billed to Medicare must be individually reasonable and necessary. A clinician’s order is not by itself sufficient to indicate that a test was reasonable and necessary. The record must reflect that the test is used in the management of the beneficiary's specific medical problem in accordance with CFR §410.32.
Labs must register a test with the Diagnostics Exchange as it reflected on the order form and is run in the laboratory. If a gene / variant is tested as part of a panel, then the lab must register the panel and must submit the correct z-code and CPT code for the panel. If a lab has a panel but sometimes also analyzes individual genes from the panel, the lab must register both the panel and the individual genes that are analyzed.
In general two or more codes describing a genetic test billed on the same beneficiary on the same date may constitute a panel, and if so the service must be billed as a single procedural service. We would generally expect that a provider or supplier would not bill for more than two distinct laboratory genetic testing procedural services on a single beneficiary on a single date of service.