NOTE:  THIS 2018 BLOG IS POSTED
FOR HISTORICAL REASONS ONLY.
CMS HAS MADE SEVERAL UPDATES TO THE TEXT OF THE NCCI REGARDING MOLECULAR CODING.
THESE UPDATES GREATLY CHANGE THE MEANING OF THE INSTRUCTIONS.
REFER ONLY TO THE
MOST CURRENT POLICY MANUAL
AT THE CMS WEB SITE
https://www.cms.gov/medicare/national-correct-coding-initiative-edits/ncci-policy-manual-medicare
original blog follows (October 2018)
Original Title from 2018:
CMS Posts CY2019 New Molecular Coding Rules!  Envisions More, Not Less, Use of 81479
Every November CMS updates a national coding rulebook called "National Correct Coding Initiative Edits."   This include massive excel spreadsheets, but also a zip file of PDF coding instructions.

The new files for CY2019 are now posted here and have some big changes for genetic coding.   NCCI edits and rules may be used by private payers as well.

Section 7 states that individual Tier 1 or Tier 2 CPT codes (e.g. "EGFR") shall not be reported with a genomic sequencing procedure, when the CPT descriptor for GSP procedure includes a descriptor for the Tier 1, Tier 2 analyte.   E.g. don't report BRCA testing (81162) along with a Hereditary Breast Cancer gene panel (81432).   Don't report individual Lynch genes along with a Lynch panel (81435).

Section 8 states that if a lab analyzes multiple genes by "a next generation sequencing procedure," report only one unit of service of GSP, MAA, or PLA code.  "If no CPT code accurately describes the procedure performed, report CPT 81479 x 1."   And:  "The laboratory shall not report multiple CPT codes describing the component results."


Section 9 states that the NCCI Excel tables, or procedure-to-procedure edits, describes CPT codes that "should not be routinely reported together."   They give the example of 91292 MLH1 gene and 81292 MLH1 dup/del analysis, adding, "it may be appropriate to perform dup/del testing if the disease variant is not identified by full gene sequencing."

These are summaries and for this article I'll ignore some probably very esoteric or obscure or likely unintentional readings of the text.   Readers should refer to the full CMS text. 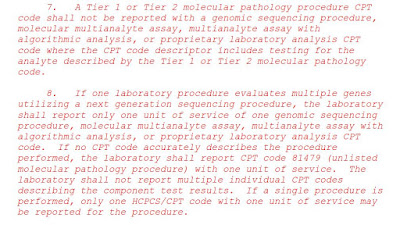 They also include a similar paragraph, not in the molecular section, but in the introductory section "A" on page 4:


Section 7:  Don't report CPT codes that are found inside GSP (gene panel) codes.   This seems like commonsensical coding advice.   I've been puzzled in the past by CMS data that MAC payments didn't seem to follow this rule.   There is a general principle to use the best-fit CPT code rather than components that add up to the same CPT code.    However, particularly MolDx may have given lab-specific instructions in the past in unpredictable combinations.

Section 8:  Use of 81479 rather than code stacking.   Here, I think the key sentence is: "The laboratory shall not report multiple individual CPT codes describing the component-test results."   The most obvious fact here is that CMS seems to be nationalizing a MolDx rule called "Genetic Test Panel Alert" that multiple CPT codes (e.g. EGFR gene + KRAS gene + BRAF gene) should not be added up one by one, but coded as 81479 (unlisted procedure, unpriced procedure).   The MolDx rule is here (and cloud archive 11/21/18, here.)


Section 9:  Dup Del analysis can be a reflex test, but don't report routinely with sequencing.  This is the only new rule that doesn't cite NGS as a method.   This is actually an improvement in some ways, because until recently MolDx had a published rule against paying for dup del testing such as 81433 (breast cancer panel dup del) at all; it was on a list of MolDx unpayable codes.   Here, NCCN says that Dup Del should be a reflex test, however, in most cases -- such as BRCA syndrome testing or Lynch/Colon syndrome testing -- the sequencing code will be negative >95% of the time so you will indeed reach the Dup Del code almost all the time.

What I'm saying is that a new rule paying Dup Del 95% of the time on reflex is better than an old rule paying it never.   I've been told that some private payers paid Dup Del coding irregularly, but this confirms a payable role for Dup Del code use and payment.

Since the sequencing code is typically negative 95% of the time, there will be a lot of endorsed use of modifiers to pay the second code, the dup del code, in those 95% of instances, at least when no other rule like use of a comprehensive code (e.g. 81162 or 81455) is available.