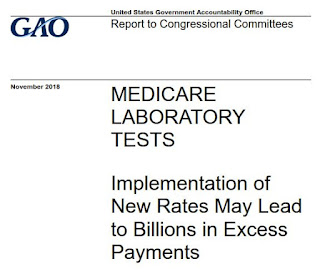 GAO has issued an unusual report that implementation of PAMA lab pricing "May Lead to Billions in Excess Payments."   This will probably be a head-spinning conclusion, to anyone watching lab payment rates fall annually under PAMA.

I think I was one of the first to report in 11/2017 on the potential implications of CMS dropping its longstand practice not to pay more for clinical chemistry panel components than it would pay for the clinical chemistry panel.  GAO picks up this same issue in its summary now in 11/2018. In addition, their Figure 6 page 29 almost exactly replicates the figure I published in the bottom of my blog in 11/2017.

CMS stopped paying a bundled payment rate for certain panel tests (groups of laboratory tests generally performed together), as was its practice prior to 2018, because CMS had not yet clarified its authority to do so under PAMA, according to officials. CMS is currently reviewing whether it has the authority to bundle payment rates for panel tests to reflect the efficiency of conducting a group of tests. GAO estimated that if the payment rate for each panel test were unbundled, Medicare expenditures could increase by as much as $10.3 billion from 2018 through 2020 compared to estimated Medicare expenditures using lower bundled payment rates for panel tests.


In addition, I have previously published (e.g. in August 2018) panel pricing graphics that almost exactly match some later used by GAO.