In an October 25, 2018, press briefing, President Trump and Secretary of Health Alex Azar proposed for public comment several new programs to lower drug payments in Medicare, such as simply and directly benchmarking Part B prices to an international drug price index. 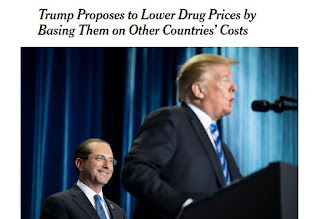 One feature of the programs will be to create a reference price list, the International Pricing Index Model, IPI, based on a range of other countries.  This is not proposed rulemaking; it is a generalistic description of a model that will be posted soon for official comment, and might, at the earliest, lead to CY2020 implementation.  Actual rulemaking would likely be extremely complex.

The program will be enacted through the wide-ranging authority of the Center for Innovation (CMMI) to conduct demonstration programs that waive existing Medicare law.*   The Obama administration proposed less sweeping changes to drug pricing, via CMMI, which were canceled weeks after the Trump election, though before the inaugural.

For the Drug Pricing on TV regulation, here.

In his 13-minute comments, Trump thanks Secretary Azar, and called out attendees Seema Verma and Scott Gottlieb.  He noted that it "had been decades" since a President came to HHS and noted that Obama never gave a speech there.  He referred to the May 2018 Drug Pricing Blueprint and noted the accelerated approvals of more generics at FDA.  He also referred to the new Know the Lowest Price act.   He noted that Americans are benefiting from the new drugs but other countries have them too at far lower prices.  (He did not mention that American companies might choose not to release the drugs elsewhere at too-low prices.)

He noted that for "an eye drug that prevents blindness" Medicare pays $1B but at international rates would pay $187M.    He referred to "a cancer drugs that is seven times more expensive" in the US.  He noted another part of the new system will be paying doctors a flat rate when delivering expensive drugs (not a price-based supplement).  He noted that Part D and Part C/Medicare Advantage premiums are going downward and "this is a word you haven't ever heard" in healthcare.  He decried a socialistic health plan in the House and by Dems that would destroy Medicare and Medicare Advantage (presumably the Medicare for All ideas.)

On a separate note, he dropped a comment "we will always protect pre-existing conditions."  He summarized by characterizing the work of HHS staff as "brilliant and complex."
____

The CMMI program would initiate new federal contractors who would be paid a fixed (e.g. European) price to acquire drugs in the US and provide them to doctors for Medicare patients.   It appears that sales from biopharma to these contract venders at low Euro benchmark prices would be voluntary.   (However, biopharma might actually be incented to undershoot the federal price to give the venders margin and drive utilization....)   Doctors would be required to collect copays from patients (based on the Euro benchmark price times 20%) and return the copays to the venders.   The pilot program would be regionalized, raising the possibility that large health systems might get full prices on one side of a zip code or county line and much lower prices on the other side.

The proposal notes that it builds on prior public comment on the May 2016 Drug Pricing Blueprint and the July 2018 Outpatient Proposed Rule CY2019, which requested input on drug pricing models. E.g. see the Pew Foundation response supporting CAP and other approaches to cutting Medicare prices, as telegraphed in summer rulemaking.
____

In a separate scenario, earlier this week FDA admnistrator Scott Gottlieb spoke at a Washington symposium and expressed concern over CMS policies that pay only a fraction of the cost of CART drug payments.  He noted this could stifle new entrants and leave CMS and the US, ironically, with only monopoly pharma providers. 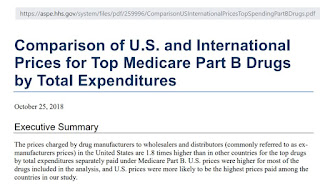 The logo for the presentation was "American Patients First."
___

For an essay, "Why Does Humira Cost Less in Europe?," here.

For an Endpoints blog about US biosimilars and drug pricing, here.

* Recall that in 2016, Hill Republicans were asserting that CMMI's authorities exceeded the constitution and ought to be canned.  Times change.  Here.