Last winter, ACLA filed a lawsuit against CMS for inappropriate implementation of the PAMA lab pricing law, resulting in underpricing of new median rates for lab tests.  The primary concern was that CMS had written, interpreted, or implemented the PAMA law's conditions in a way that nearly  excluded reporting by hospital reference labs.

News sources reported circa September 24, 2018, that a US district court judge had dismissed ACLA's case on the grounds that the court lacked jurisdiction. 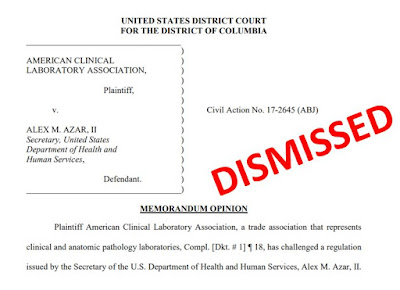 The judge's decision is readable and hinges on Congress's statute that shields PAMA 216 from judicial review.   ACLA had attempted to parse the procedures for setting up the rules (which they object to) from the actual fee schedule rates, which were clearly shielded from judicial reviews.  Judge is dismissive of ACLA's position, and uses quotations from the law to show (in her view) the shield from judicial review applies to all of PAMA 216.   This follows an earlier discussion that "federal courts are courts of limited jurisdiction" and rather like a person is innocent until proven guilty, cases are assumed to be outside judicial review until proven they are inside it.   There is an interesting twist on page 12 (that Congress required PAMA implementation through notice and comment rulemaking, so it is inconsistent to shield that rulemaking from judicial review, as it enabled the Secretary potentially to undertake reckless (but required) notice-and-comment rulemaking with no later recourse for stakeholders).*  However, this interesting side-road does not change the decision.

Footnotes.
As a non-attorney working full time on federal policy, I've always been puzzled by laws written by Congress which include a clause stating the implementation of the law is "shielded from judicial review."  Checks and balances?

According to news reports, the judge's dismissal hinges on lack of jurisdiction.  Even if the judge had jurisdiction, the section of law regarding which labs can report (with a 50% rule regarding Medicare Part B billings) is (or was or remains) problematic to craft around the issue of hospital labs.  ACLA  offers a mathematical solution on pages 9-11 of its comment letter.

CMS proposed to use 1450 claims forms in regard to its definition of hospital reference lab reporting.  AMP and ACLA seem to take diametrically opposed positions on the wisdom of this CMS suggestion.

* As quoted by judge:  ACLA wrote, "It would raise constitutional concerns of the highest order if Congress were to require the Secretary to promulgate substantive legislative regulations that directly regulate primary conduct on threat of civil penalties but then [also] attempt to insulate those regulations and the Secretary's enforcement of them, from any form of judicial review."   [Decision, page 12].