Press release by Natera and a publication in Nature Medicine, using circulating tumor DNA to predict chemotherapy benefit after surgery for colorectal cancer.

Very briefly, the study is "GALAXY" which is an arm within a large colorectal cancer study CIRCULATE.  The cohort had 1,039 patients with mean follow-up of 17 months.  When ct-DNA positive at 4 weeks post surgery, the risk of relapse was 10X higher.   Statistics show that the testing was predictive of benefit of chemotherapy (see graphic further below). 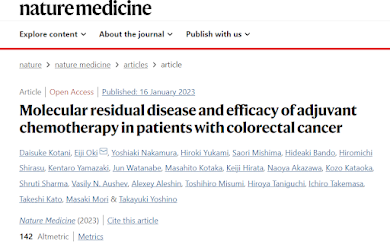 In the graphic below, on the left, if you are ctDNA positive at four weeks, your unmedicated relapse right is grim as shown in red, but with chemotherapy, the relapse rate is substantially less, shown in blue.  There is a large benefit to having gotten chemotherapy (blue better than red).

If you are ctDNA negative at four weeks, on the right, you had a very low relapse right of a few percent and not much visible impact added by chemotherapy.

Quoted in the "Briefing," one of the peer reviewers remarked, "Although anecdotal reports in a limited numbers of patients had suggested a benefit of adjuvant chemotherapy in initially ctDNA-positive patients, this large cohort provides an opportunity to assess the degree of benefit of adjuvant chemotherapy in the ctDNA-positive population, and the potential importance of ctDNA clearance."

There are some interesting strategic implications.  First, while the details of Natera's test are unique, the general category of test - detecting relapse by ctDNA - is not unique, and so other sensitive tests in this space should also be possible.  That is, the report is both a specific validation for Natera's test and a proof of concept for the field.   Second, Natera's publication sets a high bar for data (with over 1000 patients and about 18 months of follow-up, not 20 patients and 6 months of follow-up.  Third, the report may be viewed as so possible as to make replication difficult - patients won't want to be randomized away from therapy if they are test-positive (figure a above; they won't want to have treatment that matches the red line, they'll want treatment matching the blue line).   Establishing a lack of equipoise can be a barrier to entry in its own way.