Very Very Brief Blog: The Rise and Fall of a Valuation Bubble for Q-IHC, FISH

This blog, posted on October 19, 2018, reflected data in Summer 2018 CMS proposed rulemaking, as well as data collated and posted by CAP.   The data proposed a marked increase in some CPT codes such as 88360, 88365 and others.  This was due to a Medicare-proposed spike in supply payments.

In the final rulemaking, November 1, it looks like most of the "bubble" has been unwound.  I haven't done a full analysis, but one screen shot from CMS final rule carries most of the message.   For example, SL493 Estrogen Receptor Cocktail, spiked from $14 to $322 and then final downward to $16.  Another reagent, SL497, DNA Probe Cocktail, spiked from $8 to $420 and back to $8.  CMS table here: 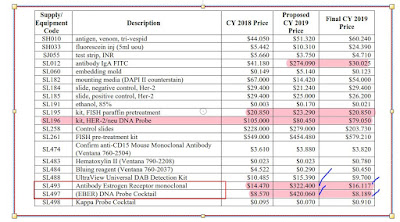 The original October 19 blog is left as-is below, describing what CMS proposed before we knew what CMS would finalize.

This past summer, CMS announced a massive revamping of capital equipment and supply inputs used to value Part B services in relative value units (RVUs).   This follows 2018 law in PAMA Part 218, allowing CMS to commission or require a wide range of information resources to value capital equipment and supplies.   The massive new pricing system was announced fairly briefly in July 2018 proposed rulemaking, but engendered comments by many groups.

College of American Pathologists published a chart showing that some selected ISH and FISH codes are proposed to rise sharply in price between CY2018 and CY2019: 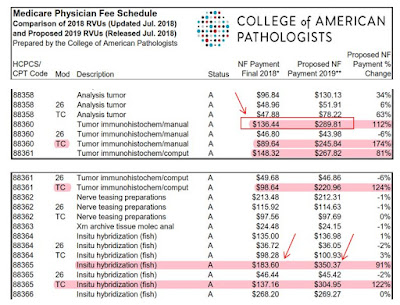 RVU prices are based on incredibly complex "bottom up pricing" that includes line items for minutes of physician time, minutes of staff time, minutes of use of capital equipment, and all supplies large and small (e.g. a surgical tool one time use supply might be $800 while an alcohol swab might be one-half penny).

(Note that there is some significant price compression before these item prices are converted to CMS payment RVUs. Through complex math and rules, the prices are stored in dollars, converted to RVUs, and then multiplied by about $30 per RVU to convert back into dollars).

With apologies they are very simplistic, I store the Excel worksheets I used in the cloud here.