On October 3, 2018, CMS released a 32-page PDF that lays out substantial changes to the LCD creation and review process.

This change primarily implements new law in the 21st Century Cures bill from a couple years ago.  However, it incorporates some other changes CMS has been planning over a period of years.

Note that there is ANOTHER, NEWER piece of LCD law that was recently passed at the House and is sitting at the Senate, H.R. 3635.  This bill has been supported by AdvaMed, CAP, and other groups.   See entry points and links on that topic here. 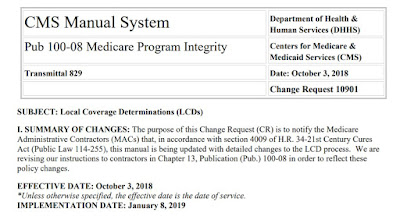 Contractor advisory meetings will be open to the public and webinar access will be allowed.  There will be an option to request, not only to revise, an LCD (13.2.2.2).   Preliminary meetings with stakeholders are allowed but not required (13.2.2.1).  MACs will be required to have a standardized format for summarizing evidence.   Draft LCDs will expire after 1 year if not finalized.

The format seems to make it impossible to make pre-emptive LCDs with no further explanation.  For example, LCDs that simply add the names of 20 or 30 new AMA CPT category III codes to a listing of non-covered codes.  Doing that wouldn't meet the requirements for evidence review and explanation.

What Is An "Explanation?"

Come key points remain unchanged (although perhaps reformatted).  For example, a reconsideration request shall receive an explanation of why the request was invalid.  In the past, that explanation (sic) has been in some cases, a clear two paragraph discussion.  But in other cases, the "explanation" has been a mere preemptive phrase "Evidence not sufficient" (3 words).

NCDs have a now-classic format where, after a decision summary and some introductory material, there are two main sections.  The first is "Evidence Summary."  (Smith et al. 2015 is a 300 patient RCT showing A, B, and C with one year outcome data.)    The next section is "Analysis."   (Smith et al. is an RCT against the standard of care, but we believe a different standard of care would be an important comparator.  We see several risks for bias in the trial design, including X, Y, Z.)   Analysis supports a final "Conclusion."   The LCD content isn't quite the same but the NCD structure provides a backdrop.


"In every proposed and final LCD, the MAC must summarize the evidence that supports coverage, limited  coverage, maintenance of existing coverage in cases of LCD reconsideration or non-coverage.  At a minimum, the summary should include the following:     • a complete description of the item or service under review; • a narrative that describes the scientific evidence supporting the clinical indications for the item or service;  • the target Medicare population; and • whether the item or service is intended for use by health care providers or beneficiaries.

In conducting a review, MACs shall use the available evidence of general acceptance by the medical community, such as published original research in peer-reviewed medical journals, systematic reviews and meta-analyses, evidence-based consensus statements and clinical guidelines.  Proprietary information, submitted by a requestor, not available to the public shall not be considered. Medicare data considered as part of the evidence review for an LCD shall be reported in the evidence summary."  [Also, MACs may consult associations or experts; 13.2.3).


Role for a "Dossier"

Depending on the topic, stakeholders may prepare a very long "Dossier" or evidence summary.  This is accepted practice in some circles, for example, new drugs, where there is a template for an AMCP dossier on the drug.   However, I have also seen cases where CMS medical directors pay very little attention to a "dossier" but simple set it to one side and focus instead on the submitted PDFs of published trials.   The new instructions say that "proprietary evidence submitted by the requester shall not be considered."

However, an earlier section also requires the request to "address the relevance, usefulness, clinical health outcomes, or medical benefits" and "fully explain the design, purpose, of the item or service and "a justification supported by the peer reviewed evidence."  That sounds like a "dossier."  So you have to write up a justification of the evidence and explanation, but not say any proprietary concepts or ideas while doing so since only published evidence is considered.

"MACs shall record (video, audio or both) the CAC meetings and as part of the LCD record, assure the recording is maintained on their contractor website." [13.2.4.3]   This is interesting in that some public CMS meetings are webcast, but, are as of now no longer archived on the CMS website or CMS youtube channel although CMS had done so in past years.  (My article on this, here).

If I read this correctly, a "valid LCD request" results in a reopening of the LCD or putting the LCD on the MAC's waiting list.  [13.3.3]

This is a big change, since previously most reconsideration requests were handled by medical director staff resulting in a letter back to the requester.  This could also create a lot of confusion, since some reconsideration requests point out, for example, an omitted ICD-10 code, which the contractor would add to the LCD in a week or two, without a year's adventure in the LCD process.   I'm not sure I have interpreted this section correctly.

I think the "escape valve" (stated in the CMS press release) is that ICD10 codes and CPT codes are being moved OUTSIDE the LCD itself (as they are outside an NCD).   This could either allow a lot of flexibility, or a lot of mischief, depending on your level of paranoia. MACs must follow "the full reconsideration process for valid requests" but the code lists are no longer inside the LCD, so it is a bit of a puzzle.

Formerly, the LCD chapter had a clear statement of if and when an LCD had to be reopened through a public process.  Additions could be handled by simply expanding the LCD and posting it (no comment process).  Restrictions had to be handled through the full LCD posting and comment process.   Here, any requested changes (even a correction or minor expansion) appears to require the lengthy full LCD process.  The result could both delay coverage and create interminable backlogs, if I read it correctly.