On Friday evening, October 19, 2018, CMS published the final contractor gapfill pricing, which are effective 1/1/2019.  (Proposed prices had been released in early June with comments due in early August).

The 18 codes were placed into the gapfill process last fall; some were codes with no pricing through PAMA and a few were new codes that couldn't be assigned a fall 2017 crosswalk.
CMS provided summary rationales for each price.  MACs varied more from one another in the final price proposals than in the preliminary ones in June.  However, the final price is set by the median, which is controlled by MolDx-system MACs which essentially act as a voting bloc of 30 states.

Most of the codes being gapfilled were either "PLA" (new rapid) codes, ending in "U" such as 0001U, or administrative MAAA codes (ending in M, such as 0001M).  See table below. 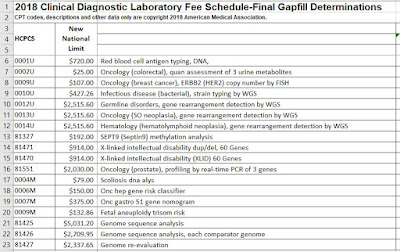 The whole genome price of $5031 is a little higher than the whole exome price of $4780, as set by market rates under PAMA.  Use of these tests is likely to be rare in the Medicare population but a growing literature has documented the usefulness of whole genome in special cases including gravely ill newborns.

These are "final gapfill prices" but CMS is "accepting comments" until November 19 at  CLFS_Annual_Public_Meeting@cms.hhs.gov .  Elsewhere CMS refers to this as an (ill defined) chance to "appeal" the gapfill final amounts.  If CMS takes any action on such "appeals" there is not much outside evidence of it other than the final prices on the 2019 CLFS in November would be different than those shown here in the "final gapfill" values.  (And note that the November 19 deadline for comment means it is very close to the lockdown of 2019 fee schedules anyway).   This is in contrast to an appeal of a final crosswalk value, which kicks the whole code back into the next summer public meeting again.
__

Disclosure:  I served as a consultant this summer to several entities working to raise the median price from the initial $349 to $5000 or better.

See the original CMS spreadsheet at the link early in the blog.  I've put a slightly tricked-out Excel with highlighted tabs for short summary views and comments views in the cloud, here.
__

Initially, several contractors felt this code represented interpretation only and thus averaged two comparable codes (G0452-26 and 88291).  Upon further review, some contractors followed public recommendations to use CPT 81417 as a similar test on the CLFS. Others did not recommend this similar payment rate and instead estimated a professional labor rates for the code.

DTC testing on Amazon - for you and maybe your dachshund too... 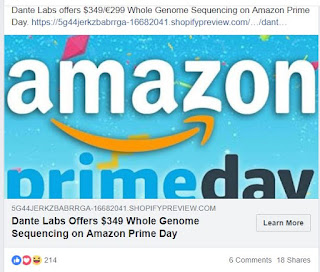