Update.  Final pricing in late November yielded no changes except 81418, Six Gene Panel, is going to be gapfilled rather than crosswalked to $742.

I took time to sort out the PGx codes, of which there are 7.  As I've ordered them in the cloud spreadsheet here, the first code is the AMA's own proposal for PGX of 6 or more genes, which CMS proposes to price at $742.

After that, the next four codes are variations of PGX panels from OneOme, and frankly, the pricing doesn't make sense to me, so maybe there's something over my head here.   Here we go.

Of the four One Ome codes, I've ordered smaller to larger, with the first being the 16 gene panel.  CMS proposes to price at $1336, the same as the 15 gene Myriad panel just mentioned.  OK.

The other one has identical language but adds the phrase "gene drug interactions" and CMS drops the price to $742.   This is a little head-spinning for me.  I don't know if there's a typo or if there's something going on that is escaping me.

The final PGX code is a small 3 gene panel from RPRD labs in Wisconsin, CMS proposes $134, the price of a small warfarin panel 0030U.

I've put a cloud spreadsheet at this link.

It's not too readable but I'm including a JPEG also:

And a line chart: 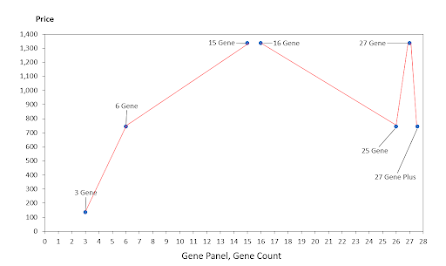