CMS Releases National Data File for CY2019: 81408 Is The Fraudomatic Code in Some States - Submit Your Claims Tonight!

On September 16, 2020, I noted that CMS had released Excel spreadsheets of Part B spending by CPT code for every state - here.   On September 22, I released some deep dive analysis of MoPath spending by state - showing massive increases in fraudulent spending, in some cases, the states and CPT codes where the spending was concentrated.  Here.   I noted that the most egregious cases - the ones that popped out high to the naked eye, like Florida, D.C., and Oklahoma - were either under the Novitas or FCSO MACs, both subsidiaries of Florida BCBS.

The files can maddeningly tedious because they are broken into dozens and dozens of individually tiny files (e.g. 13 kb, 21 kb) with short runs of CPT/HCPCS codes.

Luckily PATH series codes, including "U" or PLA codes, are in one file named Y2019_0001U.xlsx on the CMS website linked above.

I sorted all the Path/Lab codes by TOTAL (this sums technical component, professional component, other, where they exist).  Total Path/Lab dollars allowed were $7,133,811.

The highest code was 88305 (surgical biopsy) with 20M services and $1B in dollars allowed.

The next highest code was 80053 (routine chemistry panel), with 29M services and $342M dollars allowed.  As you can see by eyeball, with around 30M services and around 300M dollars that's in the ballpark of $10 per service. 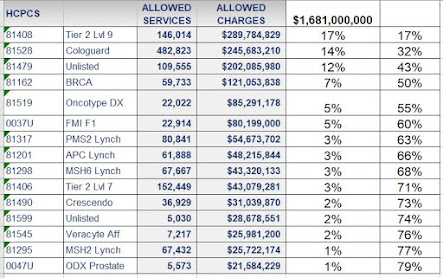 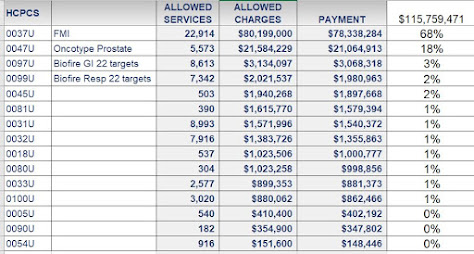 The Reward For Most Unbelievable Code Goes to - 81408

Here's the basics, based on national Part B spending files:

If spending on this unbelievably rare gene set had been kept at 2017 levels, the whole of national MoPath spending in 2019 would have been nearly $300M dollars lower.

It's pretty tedious to do 81408 spending in CY2019 by MAC - you'd use the 50 state spreadsheets one at a time - but it would probably show that some MACs were completely resistant to this fraud and others gushed out money like a firehose.  For example, I quickly found that despite TWO YEARS of explosive fraudulent use of this code, according to the CMS Coverage Database, the Novitas MAC still has a billing article A52986 that says "81408 has no edit codes at this time."  Ya think? I think they already noticed that.  This clipping next is from TODAY.  Wake up and smell the coffers being drained.

Click to enlarge, but it may give you nightmares:

81408 seems to be the most popular code with fraudsters, based on other analyses I've been doing.  There are only 24 allowable rare genes listed under 81408 - little gems like "LAMA2 congential muscular dystrophy, full sequence" and CEP290, Joubert syndrome, full sequence (a cerebellar malformation that cause gross maldevelopment in infancy with mean age at death age 7. 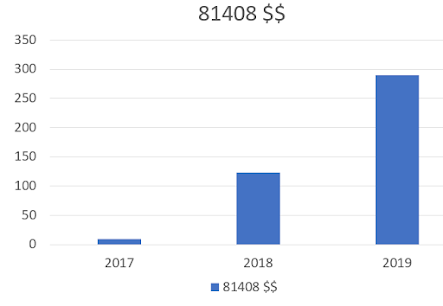 Fraudulent payments in CY2018 should have been released by now in an annual CMS database containing physician/lab payments.  However, CY2018 is not being released - perhaps because of the coming election and the fact the egregious Operation Double Helix overpayments were occurring on this administration's watch.  Here.
____
In 1HCY2016 PAMA data, reported to CMS in 1Q2017, nationwide commercial payer payments for 81408 were $28,800,000 for 16,159 cases, with a price range from $2.16 to $22,547 and a median of $2000, which set the CLFS for CY2018-2020.  Double the cases and dollar volume to approximate commercial payments for 81408 in CY2016.  It's unknown how many of these are legit uses of the orphan genes stored under 81408 or how many might have been concerning but simply autopaid at a percent charges.  Excel.
___