In a recent blog, I reviewed CY2019 Medicare pathology & laboratory spending, which is about $7B, focusing on human molecular pathology (e.g. 812xx 813xx 814xx 815xx) which was about $1.7B.  Here.  The Part B data doesn't include hospital outpatient or hospital outreach claims.   I added a deep dive on 81479 (unlisted code) here.

In this article, I'll briefly describe an area that some readers are less familiar with, molecular microbiology payments.  These are CPT codes 87471-87801, then skip to 87900-904.

As occurs in other areas of lab medicine, charges are enormously concentrated.

I've put a screen shot below (click to enlarge) and I've put my working Excel file in the cloud here.

A lot of microbiology spending goes through pretty non-specific codes.  This was a problem in the human molecular pathology realm, due to hundreds of millions of dollars of fraud being driven through 81408, a non-specific complex gene code (see my 2019 analysis here ending with a focus on 81408 and is problems.)

87633, the second highest-code, has Medicare Coverage Database edits only at the MolDx MACs (WPS, CGS, Noridian, Palmetto).  Screenshot below taken 9/27/2020. 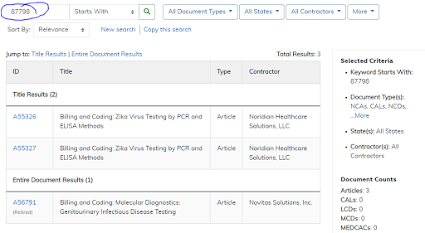 Payments, at least through 2017, were incredibly concentrated.  For the 12-25 pathogen panels for GI and for RESP, 87633 and 87507, about half of all the nationwide Part B payments went to 4-5 providers, and not particularly large places (not Quest, etc).