There was $1.6B in Part B Medicare spending for Molecular Pathology in CY2019.  Hundreds of millions of dollars were fraudulent.

Among the normal spending, the #3 molecular pathology code with some $200M of claims, was Unlisted Code (Miscellaneous Code) 81479.

In a previous blog, I discussed 2019 Medicare Part B molecular pathology spending, highlighting several trends including explosive growth in fraudulent spending, where and under what codes.   Here.

In this blog, we take a deep dive on spending under the MoPath Unlisted Code, 81479.  I collated data from the 50 state spreadsheets and found it summed correctly up to data in the single US national Part B spreadsheet.  All data shown use "dollars allowed."  (Since MoPath doesn't have copays, this is similar to actual Medicare program dollars spent.)

Nearly all spending under 81479 was in the MolDx states.

All the data I've quoted is in the table below (click to enlarge). 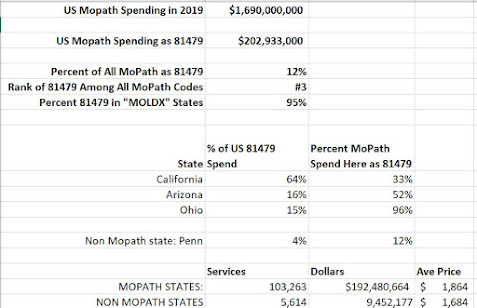 It's not an Excel artwork but I've put the underlying data worksheet in the cloud here.