Beginning several years ago, after HHS lost lawsuits regarding whether physician billing records to Medicare were private or subject to FOIA, CMS began releasing annual physician and other part B provider billing records online.

Records are available for CY2012, CY2013, CY2014, at this website; click Interactive Dataset.  The full dataset is 2 GB (too large for Excel) but there is a web interface from which you can select and filter data and download it.  For example, all Part B providers of allergy skin testing (95004) make about a 1MB file.  (To use the database yourself, see my instructions here.)

CMS had been releasing annual data after about 16 months, e.g. CY2014 data in April 2016.   CY2015 data has not been released.  Possibly, because physician groups have protested data release, the Trump administration will stop voluntarily releasing data.  (If so, I believe parties could still get the 2 GB file via FOIA).

A Case Study With One HCPCS Code

What's of interest is your ability to further sort the data.  The facts are pretty shocking.  The highest paid provider for allergy skin testing garnered $1.2M from Medicare - for 95004 alone.  He was paid about $1,500 per patient - at $7 each, that's 180 daily skin tests per patient.  (This was in New York.)   Of the 15 busiest annual providers of 95004 nationwide, by dollars per year (for all patients), only one was an allergist.  All were paid over $200,000 per year by Medicare for allergy testing.  Most of these high billers were in New York or Texas.

About 30 providers were paid by Medicare over $700 dollars per year per Medicare patient, most with over 100 skin tests per patient - on average.   All but 5 of the top 33 providers with that billing pattern were allergists.  Of the top per-patient billers, most were in California.

About 570 of the 4100 providers billed, on average, more than 70 services per patient.    (Several LCDs and BCBS sources cite a maximum of 70 tests per patient, though others have lower suggested limits).  These providers grossed $20M for 95004 out of the $58M total paid for 95004.  In sum, about 33% of Medicare payments went to providers who were billing at above-guideline intensities, sometimes far above guidelines. 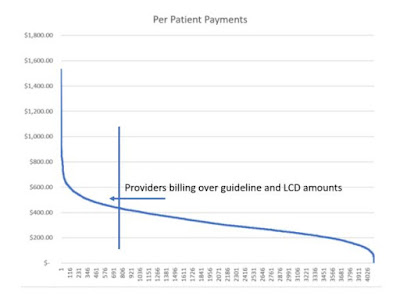 CMS should keep releasing Part B data, and public sources should study it to identify the biggest overspending problems in Medicare and keep the executive branch on its toes.  Stay on the lookout for whether CMS releases 2015 data by June or July of 2017.

As George Orwell wrote, "To see what is in front of one's nose needs a constant struggle," but the online CMS database is a big help.