My kids are in high school, but you may need to explain Medicare BRCA pricing policy to your sixth grader, when they are learning bar charts.

Medicare currently pays for BRCA genetic testing services at any of four different price levels, depending on coding choices and the state where the lab is [click to enlarge]: 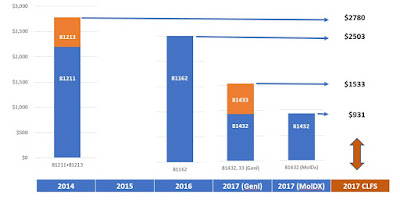 In 25 states, the MolDX program lists 81433 as a nonpayable code, so the $931 cap applies for panel testing in those states.  I use the MolDX pricing in the next two charts.

Here's a bar chart where the price axis is normal, and the work of genes tested is unnaturally expanded or compressed (a couple genes is very tall and a dozen genes is very tiny): 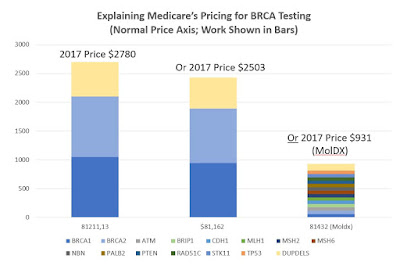 Here's what it looks like if you set the bar charts to show the laboratory work -- more genes makes taller bars than a couple genes -- this will make the Medicare price axis turn UPSIDE DOWN: 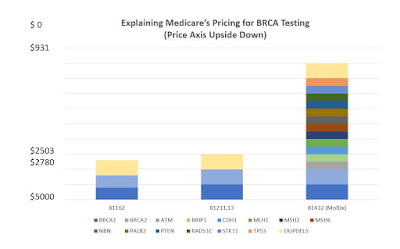 Based on 2015 claims data, Medicare paid well over $50M for BRCA testing services.  If the MolDX price policy were applied with consistency, Medicare would have paid only $18M - saving over $30M per year or $300M over ten years.

Was Implementation of Panel Pricing Policy Frozen by Executive Order?

If CMS was planning to implement its long-standing panel pricing policy for genetic testing 1Q2017, it may have been derailed by the executive order to freeze federal agency rulemaking and policymaking.

In August 2016, CPT Assistant, the AMA's correct coding resource, fielded a question on what to do with multiples of genetic tests that didn't meet a gene panel code.   AMA responded that Tier 1 codes should be stacked, Tier 2 codes used in multiples as necessary, and additional services represented by an unlisted code (81479).

Then you get the following charts, with the hypothetical 9-gene stack coding paying about $4800 - and this is still less work than the 14-gene panel which would pay only $931.   In some places, without special manual edits, CMS or other payers' computers might autopay the price in the left bar. 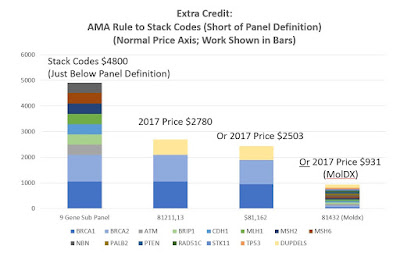 We can also map this approach onto the format with a reverse-price axis on the left, running the payment from about $5000 (for nine genes at far left) to $2500-2700 for two genes and down to only $931 for 14 genes (at far right).  By adding an option to code for genes just short of the panel definition, and by not applying the panel pricing rule, the price access anomaly becomes even more grotesque: 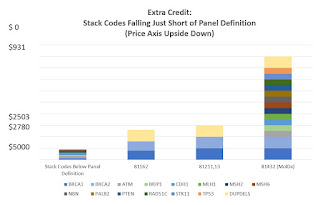