On June 15, CMS posted the fourth annual comprehensive data set of claims and payments to Part B providers.  See the home page for the annual data sets here and the 2015 data set here.

As described here in a recent blog, the data can be downloaded as very large 2 GB files incompatible with Excel and requiring database management software.  However, CMS also provides an extremely user-friendly online data screening and sorting webpage.   For a discussion of the value of the dataset (using 2014 data), here.  For my brief overview of how to use the dataset step-by-step, here.

For an example of dataset use, see below the break.

Case Study: Medicare's Use of the Unlisted Molecular Pathology Code (81479)

In two or three minutes, we can identify the US payments by provider name under code 81479.

We can sort payments by state organized by CMS MAC contractor.  Almost all the 81479 payments go to MolDX states (99.7%). 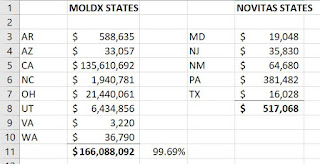 Going back to the highest-paid 81479 provider, another minute or two of effort gives us Ambry Genetics' 2015 Medicare payments (in terms of dollars allowed), which appear to total around $38M, of which around 83% or $31.7M are unlisted code as already mentioned.

[*] The data does not include providers of a CPT code with 10 or less claims.

The CMS webpage is powered by "Socrata," here.