I have pulled out the molecular codes 81161-81599, and cross-sorted it by CPT code, by Utilization, by Dollars Allowed, and by Price per Test.   See the manipulated Excel spreadsheet in the cloud, here.

This is CMS data, not representative of all clinical uses of genetics.

That said, there were only 25 codes that were used >5000 times.  They captured 95% of all CMS molecular payments.

CYP Codes Down
Utilization of codes like CYP2D6 and CYP 2C19 apparently halved from CY2014 levels, as reported here.  (See also table at bottom of this blog entry).  (All tables can be clicked to enlarge.)

More data cuts after the break.

Utilization clustered in Level 2, with some use of Levels 1 and Levels 4,5.  Across all Tier 2 codes, there were 137,000 Medicare paid services for $22M total dollars, about 5% of total dollars. 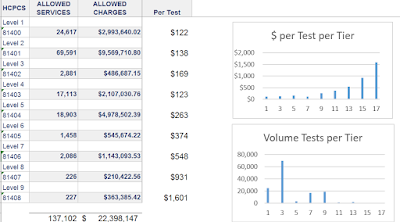 (This is surprising enough I would want to triple-check it before betting the house on it - is there anything funky about how CMS allocated CY2014 and CY2015 claims -  but it's my impression.) 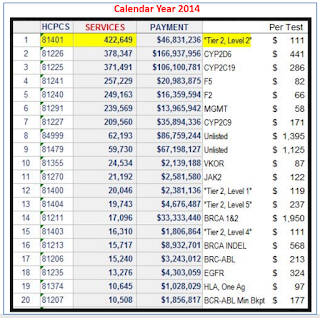