Data on CMS payments for CY2014 genetic CPT codes have been released.  Total payments were about $650M in Part B; about 10% flowed through "Tier 2" codes.  The top five codes by total dollar volume including the winner - 81401Tier 2, Level 2; followed by two CYP genes and the clotting factor genes Factors 2 and 5.  Just 3 codes captured 55% of the $650M spend.

Every fall, Medicare releases a "National Summary Data File" for Part B data for the previous year, listing the payments for every AMA CPT code.   (In the last two years, Medicare also releases vast datasets which show CPT code pyaments by physician).

To see Part B CY2014 payments broken out by CPT code, line by line, see the CMS website: here.

That's the full data set for all CPT codes.  I culled genomic test codes, in the cloud, here.

Just behind 91401 are several CYP genes and then hematology genes (F5, F2).  The unlisted codes 81479 and 83999 come in at about $70-80M each and circa an average payment of $1000 each.  Given the size of the payments, this are likely often molecular tests and not other uses of the clin chem unlisted code.  In CY2014 much of the unlisted codes were likely MAAA tests.

Code use is highly concentrated.  3 codes account for over half of dollars spent, and 20 codes account for about 95%.   Total spending for genetic test codes (including a couple unlisted codes, as mentioned) was about $650M. 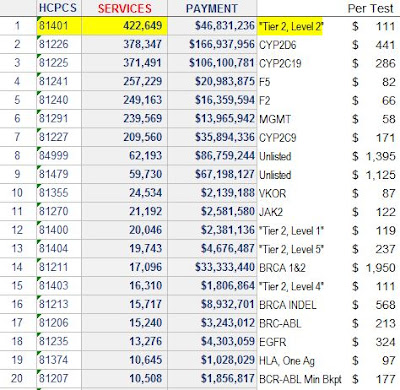 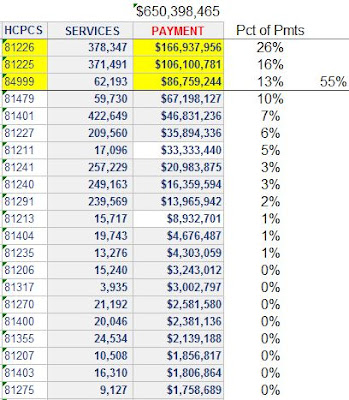 Use of Tier 2 codes was as follows.  About 10% of all payments flowed through Tier 2 codes. 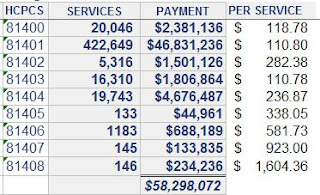 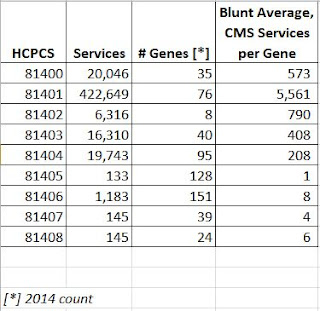 CYP COVERAGE
Despite the large volume of payments shown above for CYP and other pharmacogenetics tests, CMS coverage policies are generally written narrowly (as are policies of most private payers).