This is one of the oddest stories I've seen in a year.  Since it likely involves a lot of litigation, I'll focus on what MedPageToday has reported.

The article links to a WPS MAC recoupment articles, which announce retroactive claim denials and recoupments for certain HCPCS codes for injections of "manipulated and/or placental tissue biologics for injections."   Find the WPS MAC article here.
The MAC doesn't seem to list the HCPCS codes that are involved, which surprised me a little.  The MAC does cite a Medicare manual passage stating, "The A/B MAC (A), (B), or (HHH), or DME MAC will deny coverage for drugs and biologicals, which have not received final marketing approval by the FDA unless it receives instructions from CMS to the contrary."
The FDA periodically has published alerts to the public about "regenerative medicine products" such as "stem cells."  Here from 2020.
While the MAC doesn't cite HCPCS codes, the in depth MedPage article refers to at least one code, Q4206.  The approval of the HCPCS code is summarized at the CMS HCPCS meeting of May 13, 2019, which is in an online CMS PDF at page 11 (here).   Historically, Q codes were issued for specific Medicare program needs (such as to implement an NCD rapidly) and Q codes were issued quarterly at a time when other HCPCS codes were normally only issued annually.
Coverage?
Possibly, the coverage could be related to the 21st Century Cures Act, which made it harder for MACs to create and revise LCDs.   Possibly, CMS told MACs to pay claims with legal codes unless (1) they had bandwidth to stop the claim for manual review by clinical staff, or (2) they had an LCD on it.  Lacking either, the codes may have autopaid at the time of submission.  Autopay is common, for example, codes for office visits, or appendectomies, generally autopay.  It sounds like these were "buy and bill" products, so the first line of recoupment is the doctor or clinic that billed Medicare, not the manufacturer.
I found an article A54117 describing coverage of Q4206 at Novitas MAC here.
Payments for the one code mentioned by MedPageToday, Q4206, were $19M in CY2020.  (Here.)  Around Summer 2022, CMS will release 2020 files of which doctors were paid for the code (and all other HCPCS and CPT codes).
Pricing?
I'm not sure how codes for stem cells etc would have been priced.
CMS has a lot of Q codes in DME pricing files (e.g. here) and a lot of Q codes in ASP drug pricing files (e.g. here).   In the time available, using those 2 sources, I didn't find a published reference price schedule at CMS which would allow autopay of (for example) Q4206. 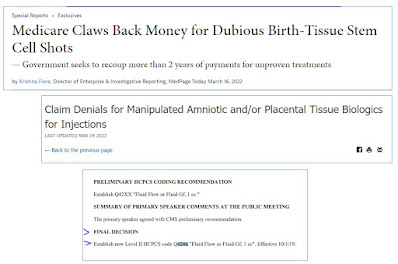 ___
And the lesson is...
For startups that are working they tuckus off to get Breakthrough Approvals and other validations, and finding it dead-hard to get a single dollar from a MAC, they'll be mystified at how tens of millions of dollars allegedly flowed out this way, again, taking the MedPageToday article as the source.
____
Cloud copy of WPS article here.
A54117 here.  A54117 linked to Novitas LCD L35041.