CMS, under Biden, has now officially proposed cancellation of a suspended Trump administration rule.  The rule would have granted unconditional 4 year coverage to FDA breakthrough devices.

In September 2020, CMS proposed to create immediate and unconditional automatic coverage, for four years, for all FDA breakthrough devices.  This is the "Medicare Coverage of Innovative Devices" or MCIT rule.

The FDA BT pathway is a review pathway for devices that do not have an FDA predicate or are novel in some other promising way.  It is issued early in the review process for promising devices, and is not contingent on the actual final performance of the device after clinical studies and FDA final review.

At least several hundred devices have entered the FDA BT pathway in the past several years.

In January 2021, CMS under President Trump finalized the MCIT regulation.  However, in March 2021, the Biden administration delayed it til May.  In May, they delayed it again, until December.

On September 13, 2021, after market close, CMS released a proposed rule that would exist simply to reverse the prior finalized rule, and would cancel the MCIT regulation.   CMS explains that public comment led it to reconsider problems with the MCIT rule.  For example, CMS now believes the MCIT rule would have resulted in erroneous coverage of devices even if they had no evidence specifically in the Medicare population, or coverage of devices whose manufacturers fail to complete post-marketing studies.

Rather than unilaterally "cancelling" the rule, CMS must administratively "propose to cancel" the rule, take public comment for 30 days, and then issue its final position.   But the net policy is simply to retract the prior MCIT regulation.

CMS published a "typescript" or inspection copy on September 13, and a full typeset publication will appear in Federal Register on September 15.  Comment runs until about October 15.

The rule can be read at the link, see also commetns box til October 15.  https://www.federalregister.gov/documents/2021/09/15/2021-20016/medicare-program-medicare-coverage-of-innovative-technology-mcit-and-definition-of-reasonable-and

CMS also released an essay on the MCIT topic which is penned by Dr. Lee Fleischer, Chief Medical Officer.  The main point is that MCIT is being canceled, but the general topic of adequate and timely coverage remains a priority of CMS administrators. 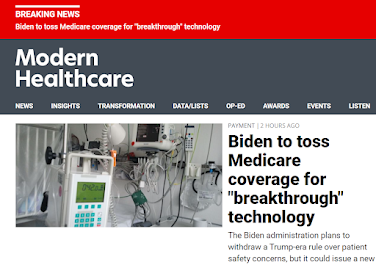 Note, if you look up for example the definition of "reasonable and necessary" at 42 CFR 405.201, on October 15, 2021, at eCFR.gov, it will show the legacy section, and it has three headers to the insertion, and postponement, of various pieces of text by the Biden and Trump administrations.  A bit comical but there it is. 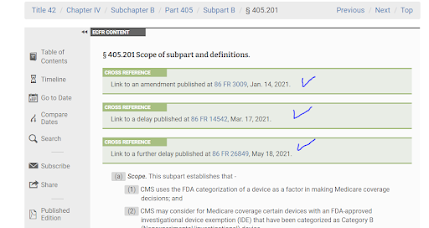