In a prior blog, I noted that CMS has just released data by provider (physician or lab) and CPT code for CY2019.  I also discussed usage of the largest code in genomics, 81408, billed only by labs in the Novitas and FCSO jurisdiction.

The cloud data file is here. A summary by states is in the table below. 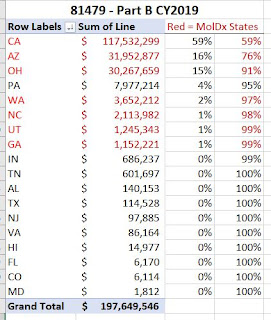