In December 2019 - pre COVID - Congress passed a law that included a delay of the CMS PAMA lab pricing process, while asking the advisory body MEDPAC to look into Medicare's implementation of PAMA law.   MEDPAC flagged some of its early PAMA findings in a PowerPoint presentation to its advisory committee this past April 2.

The MEDPAC PAMA report was due by June 2021, and it's out.  It's part of a bundle of different reports and topics, totaling 403 pp, 40 pp of which are about PAMA and lab pricing.

To my eye, MEDPAC understates the fact that a huge part of the growth of "expensive tests" in 2018, 2019, was due to what the DOJ has alleged are fraudulent claims under Operation Double Helix, which DOJ says tallied $2B in charges, thus swamping out the normal industry for genomic tests.

MEDPAC inserts several pages on the profitability of COVID tests for large suppliers.

Taken as a whole, the 403-page report covers many topics and is summarized in a MEDPAC press release, here. 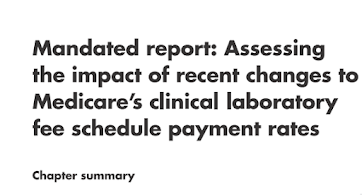 In its April committee presentation, MEDPAC staff suggested that CMS or Congress consider banning telemedicine genetic test orders.  It was also mentioned in a different context, the March report on telehealth.   That isn't mentioned in the June report today.

[*] MEDPAC states in Chapter 9 p.315 that the full RTI report is on the MEDPAC master website, but I didn't find it yet.