On April 2, 2021, MedPAC gave a half-hour presentation on PAMA policy and its recommendations for potential changes.  The full report will appear in a June 2021 as a report to Congress.

Stakeholders have complained that in 2017, CMS used rules that selectively under-reported test payments to hospital-based outreach labs and to physician office labs.   In fairness to CMS, the agency was navigating rules from Congress about a lab's revenue sources (Part A vs Part B), and had instructions from Congress (and advice from AMA) not to overburden small physician labs with reporting.   Since then, likely in response to legal actions, CMS has broadened the basket of hospital labs required to report in the next PAMA cycle.

MedPAC used an outside contractor, RTI, to review two topics.  One, could one selectively sample labs and get equally accurate pricing?   The answer is obviously "yes," you don't have to count each one of billions of claims to pin down what the median is, within a percent or so.   And, if you sampled more hospital and physician claims, the median price which sets the next CMS fee schedule, would go up.

They also considered just going straight to commercial claims databases and not bothering labs directly for data at all, but they seemed lukewarm to this idea.

In discussion, one panelist wondered if other pricing methods like "competitive bidding" would be better.  That, of course, would be a wholly different legal and policy approach with a lot of complexities (see footnote).   A panelist noted that point of care (local) tests had values, like rapid care and avoided return visit, that may justify marginally higher costs and prices.   A MedPAC staffer noted that the MedPAC was thinking about how to handle all sorts of high priced items with new approaches, whether drugs, DME, or genomics. 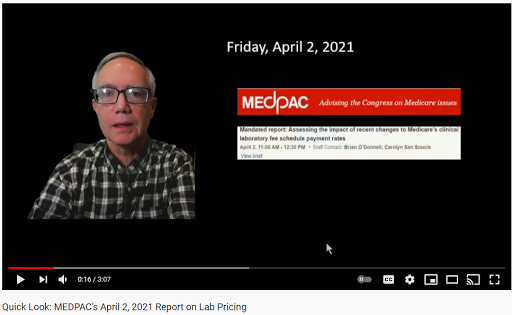 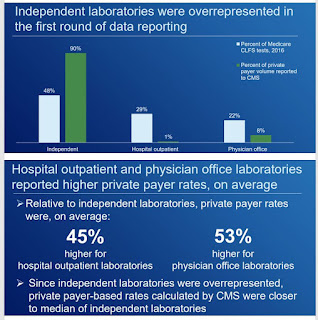 ___
There's an academic article in 2014 about the 2007/2008 effort to push the lab fee schedule into a competitive bidding framework - Kautter & Pope, here (fee).  The lab competitive bidding originated in the Medicare Modernization Act of 2003.  After various legal battles, the competitive bidding effort was tanked by a judge in April 2008 - here, here.
I've seen the hospital/independent lab difference personally, when one year I had a PSA from a hospital system lab and BCBS paid let's say circa $80 for it and another year they paid "Labcorp-Quest" if I recall circa $25.