On December 22, 2019 OIG has released its annual Congressionally required support on lab spending - for CY2019.   It may seem quite recent that we had an OIG annual ;ab report, but that's because the CY2018 report was delayed to August 2020.

Some of the rise from $475M to $1.4B in two years could be related to headlines of hundreds of millions of dollars of inappropriate charges:

The top 15 tests, across all types, are as follows. Note that most dropped slightly from 2018 to 2019. Nerd fact: CPT code 81479, unlisted molecular test, should be in mid-chart at $202M, but isn't shown. Probably because "unlisted codes" aren't part of PAMA and the OIG report is on PAMA. 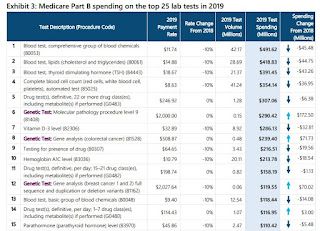 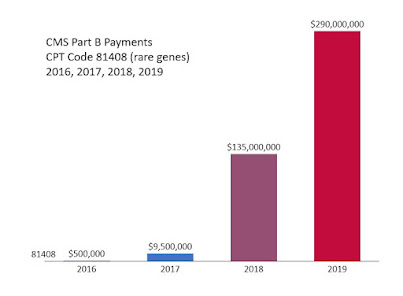 Pled Guilty
Managers for two labs pled guilty in June 2020; the labs accounting for 8% of CY2018 81408 payments (here).  DOJ writes, "Once the amount of the bribe was calculated, Ark and Tamulski drafted and submitted sham invoices to the laboratories that backed into the agreed upon bribe amount and attempted to conceal the scheme through describing various services provided at hourly rates."  DOJ adds, and I emphasize, "The charge and allegations against the remaining defendants are merely accusations, and they are presumed innocent unless and until proven guilty."
Top Code 81408 - Dollars by State
(Here in table form, the data supporting the pie chart in the figure earlier in blog.) 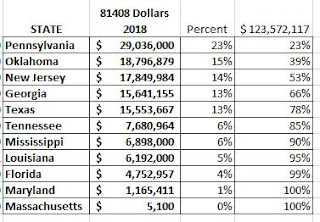 In the bar chart below, 2018 payments in $$M; purple bars Novitas except for Florida; blue bars Cahaba (defunct MAC). No meaningful payments for 81408 in NGS MAC nor MolDx group of four MACs.