The PAMA Section 216 lab payment reform of 2014 requires the OIG to issue an annual report on lab test spending in Medicare Part B as well as hospital outpatient CLFS lab spending.   Typically, these reports have come out in late fall following the calendar year being reported (e.g. Fall 2019 for CY2018).

Now, in August 2020, OIG has issued the report we've been looking for since last winter, on CY2018 CLFS spending.

We already new from data released by CMS in Fall 2019 that Part B spending (excluding hospital claims) for molecular pathology had reached about $1B in CY2018.   OIG highlights that MoPath spending rose from circa $500M  to circa $1B between 2017 and 2018.
This report provides additional detail, provides an OIG viewpoint, and includes hospital outpatient CLFS payments for CY2018.  Note that 2018 was the first year that PAMA rates were inplemented, for the 2018-2019-2020 period.  Due to line item delays enacted by Congress, the prices on this current fee schedule will be continued into 2021 and 2022, and the next "three year PAMA cycle" will be 2023-2024-2025, but based on claims data from 1HCY2019.
Summary
Here's the OIG summary.
Total Medicare spending for clinical diagnostic laboratory (lab) tests increased in 2018, despite lower payment rates for most tests. Medicare spent $7.6 billion for lab tests in 2018, a $459 million increase from $7.1 billion in 2017.

"Although payment rates for 75 percent of tests decreased in 2018 under the new payment system, savings that resulted from lower rates were overtaken by increased spending on other tests, including genetic tests and certain chemistry tests. Spending on genetic tests increased from $473 million in 2017 to $969 million in 2018 because of new and expensive tests entering the Clinical Laboratory Fee Schedule (CLFS), as well as an increase in the volume of existing genetic tests.
"Spending on certain chemistry tests also increased by $82 million in 2018 following the end of a discount on these tests [meaning: the old clin chem panel pricing system also known as "ATP" price codes.]  Finally, a one-time spending increase on some tests occurred in cases in which the national rate was higher than the local payment rates that it replaced." 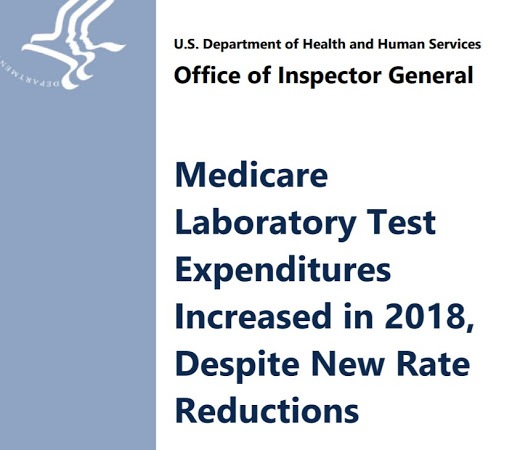 Top 12 tests by dollar volume are here.  OIG doesn't distinguish  Hospital Reference Lab and regular Part B independent lab payments.  However, you can take the dollar volumes in these OIG tables and compare them to CMS "carrier" Part B payments for 2018 and impute the difference, which must represent hospital outpatient payments.
OIG notes that for the first time, there was a very sharp spike in MoPath payments.  This year-to-year MoPath doubling in spending was also available to anyone who had seen the 2018 Part B payments released in October 2019. 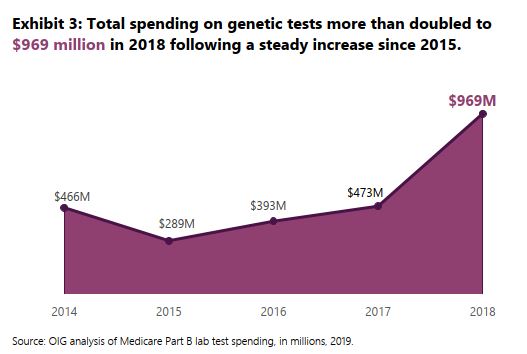 -----
Footnotes.
Panel Fee Schedules
Prior to 2018, Medicare paid for about a billion dollars in chem panel tests on a flat rate fee schedule, e.g. $10 for 5 tests, $11 for 6 tests, $12 for 7 tests, up to a cap of about $20. (Note- those are for-example prices, not exact prices).   Regardless of what chem panels or codes were billed, Medicare paid on this simplified fee schedule by just counting the number of tests regardless of coding or per-test pricing.  Under PAMA, AMA CPT panels (such as chem panels) are supposed to be billed as panels, but if 5 or 10 chem tests don't exactly match a panel they are paid a la cart at $5-15 per each test item.
For example, Exhibit 4 notes that in 2017, pre PAMA, the average fee schedule rate for these clin chem tests was $7.40 but the average payment was $3.49 under the capped system (I'm surprised it was that high).   In 2018, the fee schedule average price slipped from $7.40 to $6.66 per chem panel test, but the average payment rose to $6.08 from only $3.49
PGX Cuts Offset MoPath Dollar Volume - for a While
Around 2014/2015/2016, new LCDs were reducing pharmacogenetic payments (CYP genes) by around 90% from around $300M to $30M, and this disappearing billing left the impression that net mopath payments were about flat for a couple years at around $500M.
Wait for it: 2018 Payments by Lab, Provider, and CPT Code
Medicare hasn't yet released 2018 payments on a by-lab, by-physician basis, but they could appear any time now at this website here.