Earlier this month, OIG announced that hitherto nearly unknown Tier 2 code 81408 had become the largest genomic CPT code in the Medicare system, with nearly $290M of payments in CY2019.  I've discussed aspects of this in several preceding blogs.   I've also looked at the Tier 2 system (codes 81400-81408) as a whole which are extraordinarily skewed to billing via the Novitas system (e.g. of $400M in Tier 2 codes in 2019, only a couple percent of all Tier 2 codes were paid via the MolDx and NGS MAC systems together, which are the vast majority of US population and states).   '

In looking at Tier 2 codes, I noticed that the several labs that account for most Tier 2 code billing, tend to bill zero or very little of code Tier 2 Level 8, 81407 (here).

CMS paid for 146,000 81408 tests in 2019; it's not known how many were paid as reference tests (send out tests) from places like "ABC Laboratory" that vanish within the year.
Referred lab tests (if scrupulously coded, which might not be the case) should have a -90 modifier, e.g. 81408-90.
CMS doesn't publish data what proportion any particular lab code arrives with -90 modifiers, although those facts might be obtainable via a FOIA request.
CLIA Edits for Tier 2 Codes: The Final Shock
I'm guessing that CMS processing lab codes on claims to require a CLIA number and category that is the same as those listed in the CMS CLIA/Code/Claim requirements files.  If so, the requirements are just batty.
Most genetic codes require "220,310" which is "chemistry" or "immunology" status.  A few require 900 "cytogenetics."
OMG.  The requirements for the Tier 2 codes are published by CMS as in the table below.  All can use 610 (histopathol) while several can also use 220, 310, 400, which are Dx Immunol, Chem, and Heme.  I'm not expert in this and it looks as if you would have to have CLIA certification 610 histopathology to bill whole gene sequencing code 81408.   I don't know that for sure and will check around, but it looks crazy.  See the chart below of what CLIA subtypes are assigned to what CPT codes. 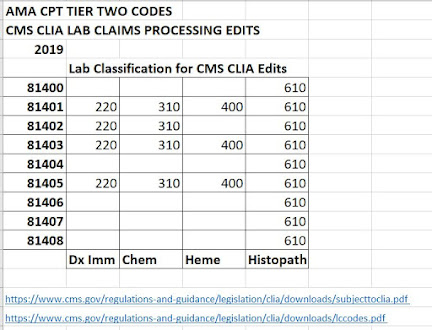 https://www.cms.gov/regulations-and-guidance/legislation/clia/downloads/subjecttoclia.pdf
https://www.cms.gov/regulations-and-guidance/legislation/clia/downloads/lccodes.pdf
This makes another point.  At least in principal, many CLIA classifications are predicated on CPT codes.  When CPT codes skew to grab-bag codes (like 81408 or 81479), it's not possible to tailor the CLIA classifications to the needs and qualificiations of a particular identified test.   We think of CPT codes as designed to handle provider-payer communications, but they also have a regulatory function in applying CLIA rules.