Now, rather than looking at "national" data, I compare MolDx MACs to other MACs.  WE'LL LEARN:  If MolDx edits were applied nationally, all Tier 2 spending would fall by 96%.  Amazing but true. 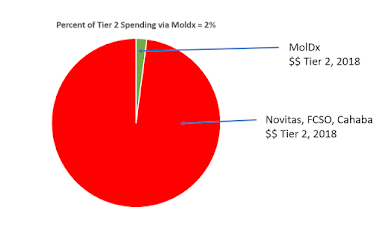 I had previously noted that the spending for Tier 2 codes was irregularly distributed and in a limited number of states, most especially for the $2000 code, 81408 (a code never paid in the NGS MAC or MolDx MACs).

But after looking at national data for Tier 2 codes in 2018 vs 2019, I wondered how the MolDx states compared, and across all Tier 2 codes.

My Research on MolDx Rules

First: No consolidated publication.  As far as I know, there's no published general MolDx "policy" for Tier 2 codes.

Second: Datamining the DEX Exchange.  You can go to the DEX Exchange website owned and run by MolDx, and look up individual Tier 2 codes by gene name (by gene names indentified inside each Tier 2 code by AMA definitions).   You could tally those up in a spreadsheet.  However, Palmetto includes a pretty strict disclaimer about using the data (other than reading it!) (here).   I looked up several genetics labs in the MolDx region, and the largest one had about 90% of its genes registered with MolDx were publicly listed on DEX as "N" nonpayable, so that suggested the edits were pretty numerous and stringent.

Third: Inferring Edits from Payment Profiles.  But there's another approach.  I went to the CMS cloud database for CY2018 (here), and the State data files.  I downloaded all usage and spending data for all codes 81400-81408 (Tier 2 codes) for all 50 states.

Then: I then subtracted the 24 states (and DC) that aren't part of MolDx.

For this purpose, since MolDx took over TN/GA/AL in mid-2018, I left those out of those "newest" MolDx states, since MolDx didn't manage them for MolDx edits for the full year (see here).

Here is the result for MolDx Tier 2 payments in CY2018:

It's possible to look up each code, each state, each lab, behind the above table.  CMS public data will tell you every lab that billed, say, 81404, in what state, for how many patients.  For a deeper analysis of the ratios of distribution of these tiers of payments in 2018, here.

Pretty damn amazing.  Overall, MolDx pays a huge proportion of Mopath spending, as much as 80% as recently as 2017.  (NGS MAC, for example, pays almost nothing in Mopath codes, except for Cologuard in Wisconsin).

But that MolDx domination of MoPath payments comes to a halt when Tier 2 codes are involved.

MolDx pays 8% of services, but only in the low-cost tiers, so overall MolDx pays only 2% of Medicare Tier 2 dollars.

I had had an inkling of this when I looked at 81408 data for CY2018, CY2019, comparing TN-GA under Cahaba edits versus under Palmetto MolDx edits: 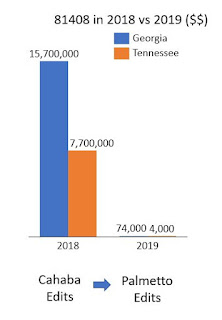 Payments for all Tier 2 codes in 2018 were $37M in GA and $15M in TN.  This is out of keeping with MolDx edits, and I found some web source stating that MolDx wasn't applied until a few quarters after the February 2018 takeover of other Cahaba-state edits.