In a short item written based on SF Chronicle, Genomeweb reports:


CardioDx, a medical diagnostic company that makes a blood test for heart disease, is shutting down, the San Francisco Chronicle reports....Chronicle adds that though the firm's closing appears sudden, it comes after Medicare stopped paying for the firm's test, Corus CAD, in November. One notice posted by the US Centers for Medicare and Medicaid Services argued that the test, which gauges whether patient with chest pain might need additional testing to rule out coronary artery disease, is not medically necessary. "Data regarding its clinical usefulness in elderly (Medicare-aged) patients, particularly males, is significantly lacking in all scientific articles," it said, according to the Chronicle.

Medicare had reversed a previous favorable decision after Medicare had been one of the few or major coverers of the test, private insurers generally and major guidelines did not follow suit. As the LCD states, "The Corus CAD test is not included in any professional society management or treatment guidelines."  The LCD also notes the predominance of company-funded, company-authored studies.

Since the company is gone, the LCD L37673, may not be permanent, so I have put a PDF cloud copy here. 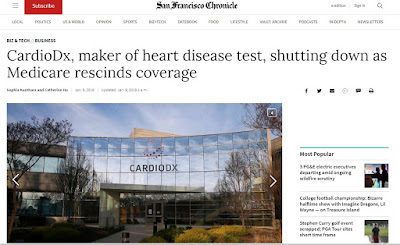