Medicare's Decision on CAR-T Coverage: No More Than 30 Days Away

It seems like old news, but CMS announced a pending coverage decision on CAR-T therapy on May 16, 2018.  The request to do so came from the Chief Medical Officer at UnitedHealthcare.

Because CMS held a MedCAC - a public advisory meeting - on the topic, they have up to 9 months to issue a preliminary decision.  That decision is due in a month, no later than February 16, 2019.


Although the public meeting was webcast (and could have been screen-captured or recorded), CMS doesn't seem to archive the video any more.  However, a 332-page MedCAC transcript appeared about four months after the meeting, in mid December (here).  (The MedCAC turned to patient reported outcomes rather than on the CAR-T therapies themselves; although the NCD request letter was solely focused on coverage issues.  An interesting pivot on the part of CMS planners.)

What will the decision be?  It could be anything from declining to issue an NCD, to issuing an NCD that largely leaves decisions on this evolving topic to MACs, to a granular and specific statement of coverage conditions.

Dr. Gottlieb at FDA recently predicted a coming boom in the number of cellular and gene therapies, here.   UK NHS approved use of CAR-T Kymriah in adults with in diffuse large B cell lymphoma in adults who did not respond to 2 or more prior treatments (here). 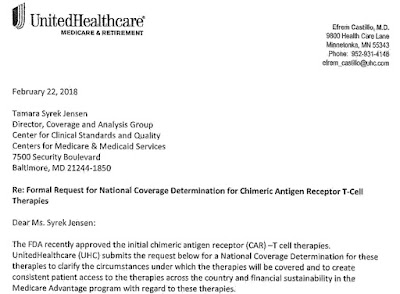 CAR-T therapies like Kymriah and Yescarta in the $400,000 range are not the most expensive CMS drugs, that may be Luxturna at $900,000 (here).  As a recent article headlines, "reimbursement is complicated," here.