Has Medicare Canceled Much of Germline BRCA Testing, Including for Ashkenazi Populations? New 2019 MolDx LCD

Today I was scanning 2019 LCDs for updates and found an unusual one in the MolDx program.

Search the Medicare Coverage Database for the BRCA panel code 81432.  You'll get quite a set of LCDs: 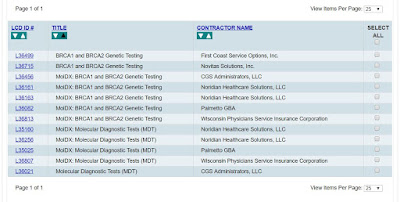 Click on the L36082 LCD for BRCA/BRCA2 genetic testing, which are frequently performed by NGS sequencing or panel testing.   Find the Palmetto LCD L36082 at this link.  The new text is clipped for you here:

^ The indications and limitations of coverage listed in National Coverage Determination (NCD) 90.2 (Next Generation Sequencing- NGS) apply to genetic testing for susceptibility to breast or ovarian cancer. While the NGS NCD Section 90.2 B describes specific coverage criteria for nationally covered tests, Section 90.2 D permits coverage of other NGS as a diagnostic laboratory test for patients with cancer when performed and ordered according to the requirements described by the NCD. According to Section D of the NGS NCD AB Medicare Administrative Contractors (AB MACs) may cover next generation sequencing tests in patients with cancer. As such, genetic testing for susceptibility to breast or ovarian cancer with multi­-gene NGS panels (not otherwise covered under NCD 90.2 Section B) may be covered by this AB MAC as reasonable and necessary when ALL of the NCD criteria are met in addition to the following... (next section unchanged)

This referral to "coverage requirements described in the NCD...ALL of the NCD criteria are met..." acts to allow NGS based testing only in women with Stage III/IV cancer, excluding women with Stage I/II cancer.   See the CMS NGS NCD here.  A November 30 transmittal includes the text, "A diagnostic laboratory test using NGS is non-covered when cancer patients do not have the above-noted indications for cancer."  This makes it sound like even, for example, NGS based infectious disease testing is blocked - "a test using NGS."

According to Cancer.net, 60% of breast cancer cases are localized, e.g. stage 1/2, suggesting the rule if applied this way will impact a lot of testing.

The NCD, somewhat bizarrely, would act to block NGS method-based testing but allow sequencing and reporting of the same genes, in the same Stage 1/2 women, under the LCD, with Sanger or PCR testing.

BRCA mutations are far more common in Ashkenazi-heritage populations.  Brandt-Rauf and colleagues write, "Lack of awareness about the possibility of hereditary breast cancer in the Jewish population which . . . has enormous risk compared with other populations—maybe ten-fold higher of having a mutation—makes it rather disadvantageous to not talk about it...The truth demographically is that over 90% of Jews in North America are of Ashkenazi origin."

Similarly, in 2017 CDC reports that "Women who had Ashkenazi panel testing accounted for approximately 5% of women who had any BRCA testing during the study period and ≤0.1% of all women aged 18–64 years."  This was age 18-64 related to employer preventive benefits under ACA; rates >65 are similar.

The USPSTF also reported about a 10X increase in prevalence of BRCA carriers in the Ashekenazi population, 2013, here.

As of January 2, 2019, the same CMS database did not list this change in the MolDx LCD for Noridian Jurisdiction E or F.   (Those LCDs haven't been updated for routine new 2019 BRCA codes either, though).  See here.

There are several reasons why it hasn't made sense, to me, to apply the March 2018 NCD to germline testing like this.   (And no MAC has come up with this explicit application to germline testing until this week, showing it is not an obvious reading of the full NCD.)

In addition to the links above, in the cloud I've put a PDF copy of the Palmetto January 2019 LCD, and a copy of a Word-based redline of recent changes.  Here and here, respectively.

Nothing in the new LCD prevents gene testing by non-NGS methods in Stage 1-2 patients.  To the extent NGS testing for germline risk mutations is allowed only in Stage 3-4 patients, this is probably counterproductive since most benefit for BRCA-adherent longitudinal management is going to be in the longest-surviving patients, not those terminally ill or entering hospice care with Stage 4 cancer.

In addition, while most BRCA testing would be equal dollars under the NCD (e.g. 81162 for BRCA sequencing and dup deletion costs no more or less to CMS with either method) - some costly loopholes are opened up.  For example, every MAC except the NGS MAC (ironic name) covers 81432, a ten-gene panel for breast cancer.  MACs aren't covering "the code," they are signally they are covering all ten genes, including BRCA1/2.  This means if a lab performs 9 genes, they are separately billable.  Here, you hit an NCCI new rule that you aren't supposed to stack Category I genes with NGS methods, but use 81479 instead.   However, that NCCI rule doesn't apply to Sanger or PCR, so it seems you CAN stack the nine HBOC genes, and starting with $2000-plus for BRCA.

The new LCD instruction tells people doing HBOC testing they must refer to the NGS NCD if they are using NGS methods.

What If Your Stage I Breast Cancer Is Gone?

The NCD says that for patients with cancer, NGS testing can be covered by LCDs only if the patient has advanced cancer.  However, a patient who has stage 1 breast cancer and a lumpectomy no longer has any cancer - no signs and symptoms of cancer.  She had cancer before the lumpectomy that removed the stage I cancer.  So does the NGS NCD apply to her - no longer an obvious cancer patient - or does the LCD concept apply (a person with "a personal history of cancer," which she does have?)

Interpreting the NCD Ambiguity to Avoid, Not Create, Absurdity

There is a tsrong concept in law that regulations should be interpreted, if possible, in a way they make sense.  One sentence of the NCD says that NGS testing can only be covered in cancer patients if they have advanced cancer.  Another sentence says that the NCD as a whole applies only to a subclass of NGS tests for targeted therapies.   The only way to coherently interpret these is to assume the second sentence modifies the meaning of the first.   That's logical.  The other way around doesn't work.
Which Is Controlling?  The Header Coverage Section of the NCD or the Sentence Restricting Its Scope to Targeted Therapy Testing?

Let's assume that only the header section is the "operative" section.  Where is that written down?   Is that in the statute?  Is that in any regulation?  Is that even in the CMS manuals - anywhere?   Maybe it's just a subregulatory concept at CMS.  But if a subregulatory concept can modify the interpretation of an NCD, then why can't a written statement in the body of the NCD modify the NCD?  Even the Supreme Court frequently uses the framing of a law as a whole in order to interpret it.

Similarly, the regulation about a recent required exception to the 14 day rule (for genomic tests) took effect January 1, 2018, and that regulatory text hasn't changed.  However, subregulatory (PDF) announcements from CMS have extended implementation, most recently updated on December 26, 2018, until July 1, 2019.   CMS regulations would fall apart and be unusable, resulting in chaos, if subregulatory definitions and clarifications did not exist and couldn't modify regulatory language.

In its press release on the NCD, CMS said that "advanced diagnostic laboratory tests now have expanded Medicare coverage."  This would not be true; FMI test already had coverage as did the Oncomine FDA test.   There was no expansion.  Under the currently floated interpretation, there would be only a retraction, of coverage under LCDs in 50 states for certain specific germline testing.  In 2017, CMS paid only $7M in 81445/81450/81455 testing, hardly meriting an NCD in a $300B program, but CMS paid $75M for germline testing (various 2017 BRCA codes), of which about 2/3 would be in stage 1/2 patients, and almost all by NGS, so retracting $50M of coverage.


1) If CMS intended to exclude germline and infectious disease testing, and carefully reviewed all the appropriate  guidelines and data, it violates statute here, because it didn't list for the public the materials reviewed on those topics or its reasoning on those topics.  In fact it did the opposite - saying things like NCCN guidelines Daly 2017 were not reviewed and out of scope.

2) If CMS intended to exclude germline and infectious disease testing, but didn't carefully review any materials or guidelines, then it violates statute by issuing a decision with no justification.   Bang.

A FOIA request or an NCD Appeal (SSA 1869(f)(1), with discovery of documents) could distinguish between #1 and #2, but neither is allowed by the statute quoted.

3) If CMS didn't really think ahead to implications of some of its language choices, and other sections of NCD indicate other intentions, then CMS doesn't have to block germline testing, under the avoidance of absurdity rules cited earlier in this blog.

Another option related to these ideas is that CMS intended to block infectious disease and germline testing, but viewed any and all prior textbook knowledge (such as the (i) discovery of clinically useful bacterial resistance genes or (ii) the discovery of BRCA founder mutations like 185delAG) by PCR or Sanger methods as irrelevant to assessing any value of clinical reporting of that clinical mutation by NGS, and thus, such PCR or Sanger literature is out of scope, accounting for the absent bibliography.  (But this, too, is a trip to Alice in Wonderland).

Internal evidence (IN THE HEADER SECTION) makes clear that CMS could not possibly have been thinking of all types of NGS testing when writing the proposed NCD, the NCD that the public had an opportunity to comment on.

Come forward to the NCD Transmittal, which includes a statement that all NGS testing not in advanced cancer is not covered.   If the original NCD really was meant to apply to all uses of NGS testing methods, why did it require RECIST testing, instructions on comparing results to "initial clinical validation of the companion diagnostic"?   Obviously, these requirements make sense ONLY if the author was only thinking of CDx uses of NGS in cancer, and not other uses like germline or infectious disease testing, in which case, these rules are just nonsense and cannot be applied.  You cannot compare the results of NGS infectious testing "to the original companion diagnostic," yet this would have been required.  On the other hand, if CMS came up with the idea to apply the NCD to all types of testing for whatever purpose if NGS is involved, only in the final draft, there was no public opportunity to comment on that idea.

Typo in the NCD.

There is an apparent typo in the Q&A section of the NCD.

Comment: A few commenters suggested that a clarification or discussion of testing and reporting of germline and somatic changes be explicit as a requirement for the report of test results in the final NCD.

Response: The final decision allows laboratories and diagnostic laboratory test developers to determine what is included in the test report. Further, the final decision is unchanged from the proposed decision in that it does not exclude coverage for testing of somatic mutations, provided the other coverage criteria are met. We note germline testing in the absence of signs or symptoms is designated a screening test and not a diagnostic laboratory test, which remains outside the scope of this NCD.