November:  Weirdly Complex Rules for Genetic Test Coding for January
In summary, around November 21, CMS released complex and confusing new rules for genetic test coding, shifting usage from direct CPT codes to 81479, the molecular test unlisted codes.  I discussed this at length in a post on November 21 here.  Basically, it nationalized a longstanding MolDx instruction to use 81479 in lieu of using two or more single gene CPT codes.

December:  CMS Tweaks Panel Coding Instructions for January
On December 12, CMS issued a further update to panel coding rules (CMS does not specify between chemistry and genetic panels in this rule).   CMS upgraded language from "should" to "shall" - if all components of a CPT panel are provided, the lab SHALL bill that CPT panel code.  The stimulus was a harsh GAO report that CMS was doing to little to enforce correct coding of panel codes (here).  Congress also asked CMS to pay more attention to correct coding/pricing of panels (here).

The updates are on the CMS Correct Coding Initiative website here.

Below, I list the new December 12 update.   After that, I again list the unusual and complex gene coding rules from November.  All of these are slated to be effective nationally on January 1, 2018.

The CPT Manual assigns CPT codes to organ or disease oriented
panels consisting of groups of specified tests.  If all tests of
a CPT defined panel are performed, the provider shall bill the
panel code.  The panel codes shall be used when the tests are
ordered as that panel.

Essentially the same instruction is found in Chapter 1, Section N, in part:

The CPT Manual defines organ and disease specific panels of
laboratory tests.  If a laboratory performs all tests included in
one of these panels, the laboratory shall report the CPT code for
the panel.

7. A Tier 1 or Tier 2 molecular pathology procedure CPT
code shall not be reported with a genomic sequencing procedure,
molecular multianalyte assay, multianalyte assay with algorithmic
analysis, or proprietary laboratory analysis CPT code where the
CPT code descriptor includes testing for the analyte described by
the Tier 1 or Tier 2 molecular pathology code.  [OK, this one
seems pretty obvious to me, nothing new.]

8. If one laboratory procedure evaluates multiple genes
utilizing a next generation sequencing procedure, the laboratory
shall report only one unit of service of one genomic sequencing
procedure, molecular multianalyte assay, multianalyte assay with
algorithmic analysis, or proprietary laboratory analysis CPT
code.  If no CPT code accurately describes the procedure
performed, the laboratory shall report CPT code 81479 (unlisted
molecular pathology procedure) with one unit of service.  The
laboratory shall not report multiple individual CPT codes
describing the component test results.  If a single procedure is
performed, only one HCPCS/CPT code with one unit of service may
be reported for the procedure.  [This proposal deviates massively from
normal coding, but resembles an existing "MolDx" rule applicable in 30
states called "Test Panel Alert" with the same intention but at
the MAC local level.]

9. Procedure-to-procedure edits bundling two Tier 1
molecular pathology procedure CPT codes describe procedures that
should not routinely be performed and reported together.  For
example CPT code 81292 describes full sequence gene analysis of
MLH1, and CPT code 81294 describes duplication/deletion variant
gene analysis of MLH1.  In evaluating a patient with colon
carcinoma (vs. constitutional genetic disorder), it may be
appropriate to perform duplication/deletion testing if the
disease variant(s) is (are) not identified by performing full
gene sequencing.  The same principle applies to other code pair
combinations of testing for the same gene (e.g., 81295/81297,
81298/81300).   [Since in these scenarios typically say 2% of patients
are positive for sequence and 2% positive for Dup Del, 98% of
patients would get Dup Del testing, resulting in mass use of the
-59 modifier.  And the allusion to tumor vs constitutional disorder is
confusing - does this rule apply to both patients? If so, why mention?
Tumors are more likely to have multiple mutations - sequence in Gene A,
Dup Del in Gene B. Also the main tumor codes incorporate SEQ and
Dup Del testing together if performed, no separate coding, such as
81455 and the PLA code for FMI F1 CDx.]

I discussed the above genetic rules as cumbersome in a November post.  It seems like they would require sudden changes for non-MolDx labs and a lot of new work for non-MolDx contractors.  Also, I've heard that Medicaid must follow NCCI rules, which would be a new big burden.   The rules also would cause confusion due to their deviation from conventional correct coding in settings like "Medicare as Secondary Payer" or other settings where Medicare has to interact with the rest of the coding world.


Note that while other chapters of the NCCI manual for CY2019 have October 31 file dates (103118), the Chapter 1 and Chapter 10 versions in November had November 6 file dates, and they now have December 12 file dates. 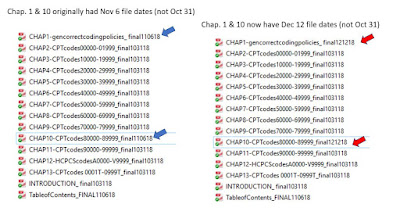