In a major advance, last week Myriad Genetics announced the publication of its GUIDED clinical trial of the impact of psychiatric pharmacogenetics on healthcare outcomes in depression (Greden et al., here).  In particular, the beneficial impact was largest in patients switched from a "red" to a better drug after testing - and you only know which patients those are, by testing a larger group.  See discussion in Genomeweb here.

However, the publication passed through at least two journals.  Last November, Myriad announced that a "first journal" where the trial was reviewed had "notified the company that as a condition of publication, the proprietary GeneSight algorithm would need to be disclosed."

Myriad resubmitted to a different journal, the well-respected Journal of Psychiatric Research.  Myriad noted in November that on publication of GUIDED, it would submit a request to Medicare to expand access to primary care physicians (currently only psychiatrists).   See Myriad transcript here.

CMS Could Open an NCD on GeneSight

CMS could open an NCD on Genesight, which is one of the largest branded molecular tests CMS covers and may be about the largest single branded or proprietary test covered that does not have a PLA code, which has implications for PAMA rate-setting.  CMS created an NCD in 2017 for tumor gene panel testing, at a time when those tests were only about 1% of CMS molecular spending, based on codes 81445+81455 (spending on those codes $6M; molecular spending about $600M).   As a proportion of CMS molecular spending, GeneSight would be several times that (e.g. several percent).  In addition, other psychiatric gene panel tests with good data are also entering the market, and CMS may want to promote uniformity of coverage (see  Bradley et al, an open access paper on a large psychiatric pharmacokinetic RCT, with favorable outcomes, supported by Althea).  Another published lab in this space is Genomind.  For comparison, CMS undertook the recent NGS cancer NCD when there were similarly  three tests for it to review (FMI F1 CDx, Thermo Fisher Oncomine, Illumina Praxis Extended Ras).

Mixed Private Coverage.  The pivotal publication, Greden et al., is now available, and that is definitely the sort landmark that CMS waits for.  For now, CMS covers GeneSight through its LCD (of which I've been a strong supporter).  However, private payer non-coverage is easy to find (e.g. example at Anthem here) which CMS is likely aware of both at the local and national level.

FDA.  Additionally, quite recently the FDA criticized claims of non-FDA-reviewed pharmacogenetic tests citing particularly those for antidepressants [see detail at foonote*], Genomeweb here.  Do the FDA and CMS talk?  Yes.  Recall that the first version of the CMS NGS NCD in November 2017 acted to block LDT testing in the tumor domain from CMS payment, and cover only FDA-based testing, and some conspiracy theorists argued this was FDA getting its way regarding LDTs via CMS.

APA.  Another issue is that an APA task force in 2018 seemed to warn that psychiatric pharmacogenetics had "insufficient data to support widespread use of pharmacogenomic tests in clinical practice to guide antidepressant treatment," here; see also here.   Both CMS and MACs look to guidelines in coverage decisions (e.g. here).  There are also cases on record where MACs have used company-funded or -authored studies as a part of a non-coverage decision (e.g. here).

Collectively, these factors such as quite mixed private coverage, FDA positioning, and APA (among others), together with the very high dollar volume under an unlisted code that loops around PAMA, make GeneSight's status with CMS more complicated than the average test under the average LCD.

Algorithms are Intellectual Property, But Are Drug Categories Printed on Reports?

Myriad, quoted above, stated that it changed journals to ensure its algorithm remains private.  APA, which would surely weigh in on a CMS NCD, stated in 2018 that "there is a lack of transparency with regard to the algorithms used by the companies to derive treatment recommendations from tests looking at multiple genetic variations," here.  While the workings of an algorithm are private, outcomes are face-valid on the test report (e.g. drugs in bins for green, yellow, red).   Given the patient's CYP genotype, the same genotype could be input into other software and one could compare how the outputs match or vary.  (There are hundreds of thousands of GeneSight tests out there, so collecting 500 for consented in silico research might be feasible).  For example, an open-access algorithm or a different branded algorithm might produce bin outputs quite close to GeneSight, or quite different.  The point is that this is an empirical question that can be easily tested, just as you can empirically test whether or not one lab's BRCA sequence interpretations match another (on the same mutation).  An organization could tell CMS, we don't know how GeneSight gets from genotype 12345 to classifying drugs A,B,C as green, yellow, and red, but our software will also input genotype 12345 and usually classify the same drugs the same way.

NCD Would Lead To Specific Coding

An NCD would most likely lead to specific code issuance by CMS, as occurred with the Cologuard approval (e.g. a CMS G-code).  While such a code would be subject to PAMA, note that the issue of PAMA is pretty distant - any codes coming out in 2H 2019 will not be PAMA-priced til January 2024.

However, the new G code would go into the CMS CLFS pricing cycle (the CMS "crosswalk/gapfill" process.)   This could simply confirm the current CMS MAC price of Genesight  (around $2000, based on public CMS data).  However, the CMS crosswalk process would overrule the local price and lock down the CMS administrator's price for several years.  In contrast, the MAC price with code 81479 could change arbitrarily either up or down as it is not registered on the national annual fee schedule.**   But the CMS national pricing process can be frugal compared to MAC pricing; AMP recently asserted CMS had mispriced BRCA components under some new AMA CPT codes by factor of three, here.

CMS has publicly flagged concerns about 81479 coding (see here).  In January 3, 2019 investor report, Barclay's asserted the average commercial payer price of GeneSight was in the several hundred dollar range (see also quotes here), but that is not the same as the PAMA median price, which ignores the $0 dollar claims.  On the other hand, if the answer is there are lots and lots and lots of $0 commercial clinical claims for a test CMS pays $2000 for, that data too could also make CMS a little edgy.

Anyone Could Request NCD

Anyone could request a CMS NCD; famously, United Healthcare requested one on CAR-T therapies last year (here and here).   Alternatively, CMS could initiate one without an outside request. 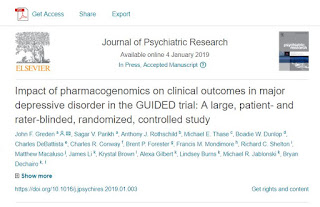 *  The FDA's pharmacogenetic warning had a mixup of messages between concerns about non-FDA-reviewed claims, which were pretty strong concerns, and what I see as entirely separable issues about patients changing their own meds without intervention of a physician, which would be very unlikely for GeneSight. That said, the FDA did state directly that: