Since 2019, CMS and OIG/DOJ have been releasing intermittent announcements about lab fraud - e.g. "Operation Double Helix."  Since at least 2020, I've been using CMS public databases to looking up the billing patterns of indicted or convicted (or pled guilty) labs, showing that they had medically unbelievable (or medically unfathomable) patterns of genetic test billing.   This past week, CMS released national lab use data for CY2021, and the fraud is higher than ever - based on the same patterns.  The abusive or unbelievable/unfathomable payments are nearly $1 in every $3 for molecular pathology.  Nearly all the payments are in Novitas/FCSO states and go to places with names like "ABC Lab" that rapidly appear and disappear.  See my current deep dive article here.

Generally, these labs have extraordinarily high billing for Tier 2 codes (CPT 81400-81408).  Generally, each patient that shows up gets one or more uses of every single Tier 2 code, which is beyond belief.  These are rare codes - for example, for genes that cause seizures in babies - defined by the AMA as uncommonly used, uncommonly needed genes.

One problem - though this is sort of the tail wagging the dog - are the Medically Unlikely Edits (MUE edits) on Tier 2 codes.  For all the other genetic codes, the MUE is "1."  For MUE codes, they run as high as 5 (!) and for 81408, the $2000 code for a handful of very rare, full sequence complex genes, the MUE is 2.   Nobody would possibly have a personal history and physical and symptom list, that then required 5 uses of unrelated rare disease genes in 81404 and 2 uses of more unrelated ultra rare disease genes in 81408.  Nobody, ever, never ever.  The edits are crazy, and have been unchanged for years despite CMS and OIG knowing that billions in fraud flowing through these exact codes.  You can get 21 Tier 2 codes for one single 95 year old patient in one morning.

A fraudster could go through a nursing home in Miami, get cheek swabs from its 100 patients, and bill for $8682 that would autopay - as least very recently, to say the least - in southern MACs.  That's nearly a million dollars for a few hours work.  Doing no more but having set the MUE's at "1" like other genetic tests, would have save hundreds of millions of dollars with a few minutes' effort. 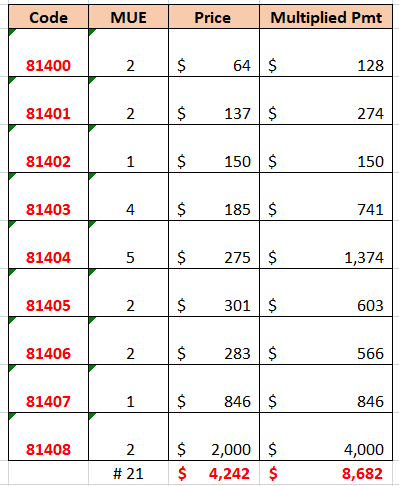