For several years, since 2018, there has been a shocking growth in the use of  Tier 2 codes in Medicare Part B, with a significant portion of labs using these codes in high amounts being indicted by Department of Justice.

You can just use the "fingerprint" pattern of super high Tier 2 code billing (by indicted labs) as a "magnet" to look for similar lab billing patterns.

The billing patterns are lab operations dominated by all the Tier 2 codes, and often only the Tier 2 codes.  These payment patterns, which are over the top unbelievable, are almost entirely in Novitas and FCSO MAC regions.  Since it is  impossible imagine that one Medicare patient needs all of the Tier 2 codes on one day, let alone 1000 patients in a row, I call these "Highly Unlikely Codes."

On a smaller scale (topping out at $200M rather than $280M) is labs dominantly billing just for 87798, "other pathogen, PCR."  At least through CY2020, almost all 87798 billing in large amounts occured in MolDx states. I also discuss this below, and include bar charts by year.

CMS has now released CY2021 data, on October 28, 2022.   Total lab industry spending (including Anatomic Path) was about $8B before the main COVID codes, which added just about $1B more.   Of this spending, $2B was in anatomic pathology.

For the rest of this analysis, I will leave off the main COVID codes, and work from the $2.8B number.

Before CY2018, when they were first assigned prices, Tier 2 codes were almost unknown in Medicare Part B billing.

Dollar volume shot up in 2018, 2019, 2020, even as DOJ was issuing press releasing that it was 'catching' bad actor labs, which, in data not mentioned by DOJ but discussed by me, the billing profile was Tier 2 billing, over and over again.  And only in Novitas and FCSO states.   Very, very, very little of spending for Tier 2 codes are labs like Ambry, GeneDx, Quest, etc.   They can be labs with names like "ABC Lab" which by the time you hear of them, Google to be a small abandoned storefront in a mini-mall by a tattoo parlor.

This seriously distorts any analysis of overall growth (or medical needs  imputed by usage profiles) for mopath spending in Medicare Part B.

See my videos about the scandal (overview here) and (one lab analyzed here).  Press releases with CMS quotes talk about the dedication and tireless brilliance of the fraud detection efforts, but the stuff being done (by looking up billing records) is grossly obvious, can be shown in seconds in Excel, and you could train a 10 year old to recognize it in five minutes.  And it's just the same in 2018, 2019, 2020, and 2021 - there has been no evolution of the abusive and unbelievable billing patterns.  And bizarrely, CMS pays for these Tier 2 genes in multiples as high as 5 (!!!), which is mind-blowing, if your mind isn't already blown to the ceiling.

If some burocrat at CMS had just taken 5 god-dam minutes to change the MUE edit of 81408 from "2" to "1" (the NORMAL MUE number for genetics codes), it would have saved nearly $150M.   (Assuming that took 5 minutes, it would amortize to saving about a billion dollars per hour of admin time.)

My data as cloud spreadsheet here.

Almost no spending for 81408 went through NGS MAC or MolDx MACs; spending via Novitas MAC and FCSO MAC.  Most labs billing 81408 billed it in multiples of 2 (occasionally, 4) - that's two full sequence of what the AMA defines as very rarely needed genes, per Medicare patient, one patient after the next. 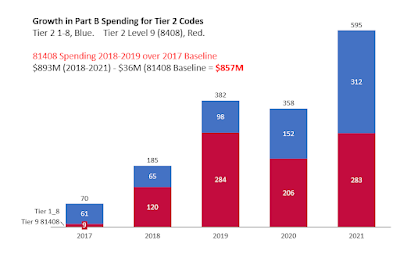 Demographics.  There's a database where you can get 2020 demographics by lab, I've listed demographics for Foundation Medicine as an example, here.
Demographics of highly suspicious genetics labs.  I checked one against a CMS provider-level demographic database (same as for Foundation in prior bullet).  Genetic testing of pediatric genes for a population 14% over age 85, (!), 30% with Alzheimer's (!), getting exactly 12, individually ordered identical genetic tests each and every Medicare patient, and for diverse  rare or pediatric diseases.   Yeah, it would be hard for CMS detectives with years of experience, supercomputers and AI to find a hint of anything fishy here.  (They were also 38% dual benes (poor), and 14% Black (racially balanced).)
Corrections made.  Due to a sorting error, 81162 BRCA was omitted from the first edition, but corrected around 12N ET on 10/31.  It should be the 5th highest code, and raises the total from $2.7B to $2.8B.