Worth knowing about.  For its Medicare Advantage plans, United Healthcare needs to follow Medicare policies, and for genomics, that's mostly local or LCD policies.

United Healthcare publishes a 49 page guide, updated regularly, of which pages 5-49 are an index to the numerous local LCDs and billing articles.   Handy to know about. 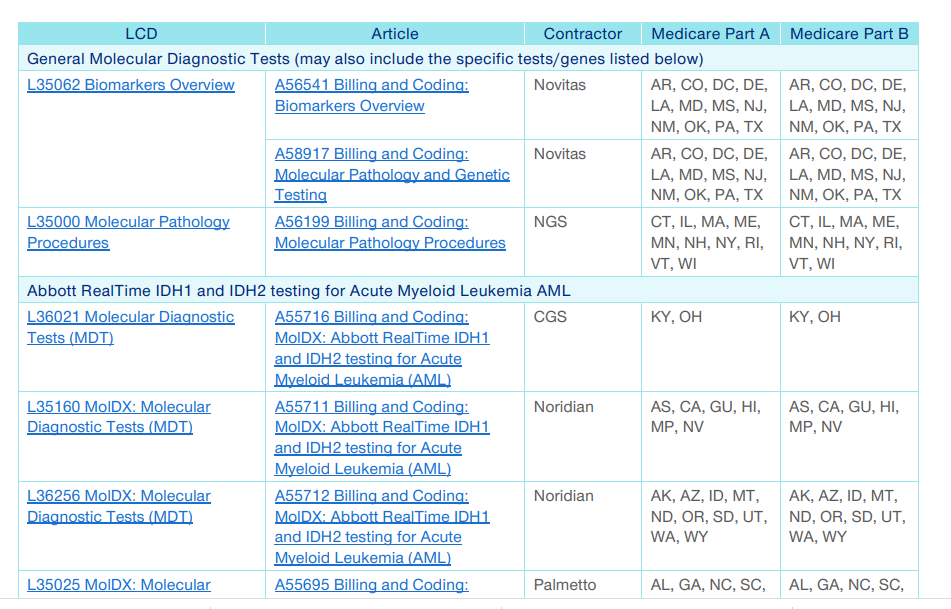 MolDx Defines an Algorithm
One thing I've heard about but not sure I've seen directly, the MolDx definition of an "algorithm" in a lab test.  Find it for example at Article A58677.  From March 2021.
An algorithm being defined as....
_______
An algorithm may be considered a meaningful and independent component of a laboratory process when ALL the following conditions are met:
Examples:
Calculations using only clinical information not derived from analytical services on biological samples are not considered algorithms in this context.
Examples would include using the clinical information from the patient in a calculation to assess their risk stratification or using a similar process to identify relevant clinical annotations derived from literature as associations with sequencing variants.
A test that inputs resultant analytical processes that are reasonable and necessary (such as gene variants or protein markers) that are post processed by computation, but wherein that subsequent computation is not independently established as reasonable and necessary above and beyond the other lab components, shall not be considered an algorithm as a valid component of a laboratory test.