On June 14, 2021, the WaPo ran an article headlined, "Coronavirus infections are dropping where people are vaccinated, rising where they are not," here.

Is that true overall, and statistically significant?  Yes.  Figure here:

States tend to map out toward the upper left and lower right, following the commonsense rule, more vax, less COVID.
However, there's also a lot of noise; OK and TN share weak Vax rates with WY and NV, but the OK and TN have much lower COVID incidence. (The Y-axis is cases per 100K per day, the range currently around 1 to 10).

I was looking at today's NYT online data of similar rates, and put them into Excel for the 50 states and DC and PR.   I got a simple Excel correlation of -0.5 (negative zero point five), which is surely statistically significant but still leaves a broad "cloud" of data points.  See the screen shot below.

States with a favorable case rate of 1 or 2 can come in anywhere from 35% to 65% vaccinated.  Some states with well above average vaccination rates (OR, WA around 55%) come in far above average in cases (at 6).

Last Fall's Peak and Plummet in Dakotas
I remember being struck by COVID data last fall of a colossal rise in case rates in the Dakotas, followed by a rapid drop (around Oct/Nov), despite a reluctance to change most local laws.   And then California had a skyrocketing rate last December/January, still rising well into January, despite a new and severe lockdown starting in mid-November (you literally couldn't sit by yourself outside a Starbucks, let alone inside, and masking in our big wide-open city parks was essentially 100%).
We Went Through Drastic Differences in School Rules

I saw a chart very recently that 30-40% of U.S. kids remained in school this school year just ended (I believe mostly in Southern states) all year, whereas schools around Los Angeles where I live were locked out from March 2020 right through til May/June this year.  Very different norms from place to place.

Covid in the Air: Breathing vs Talking vs Singing

There was a very interesting paper by Bazant and Bush in PNAS this spring suggesting that breathing transmits very little COVID, much higher with speaking, and much much higher with singing (or, of course, coughing - here; graphic below).   Essayist Holman Jenkins remarked in WSJ, "in a state that weeks ago successfully vaccinated its 50-plus population, I saw an elderly couple driving alone in their car masked up like they were venturing into a Yunnan bat cave."  (NPR on bat caves last week.)  He was making the point we badly need better COVID public education; I'm often left wondering that doesn't fully sink in how much we probably still don't know.

Will Different Covid Rates Impact Behavior, Or Will We Just Live With Them?
If we develop a situation with high Delta Covid rates in low-vax regions, will that spur behavior change?   The final real-world proof?   It's not clear what will happen, or, how we'll react.   Scott Gottlieb argues June 27 that we may see harsh pockets of Delta outbreaks in low-vaccinated areas (here).   That's both possible and may be likely, but I'd just say, we don't know for sure.   If that happens, what will  happen next?  Will it be the smoking gun that causes behavior change?   Again, maybe or maybe not.   Witness that we roll on for decades with lung cancer rates 3-4X higher in some states than others, for example.  We just live with that.  Could we see the same for Covid, with some sharply identified areas just rolling on with low vax and high Delta?   Maybe, but my main point is, it's hard to know.

____
[*]
Footnote.
This chart was designed to show the reader the rise in school attendance in the second half of the year (blue line). But living in a near-zero-school state, I was struck to be reminded by the "yellow line" that 30-40% of kids nationally were always in school this academic year - here. 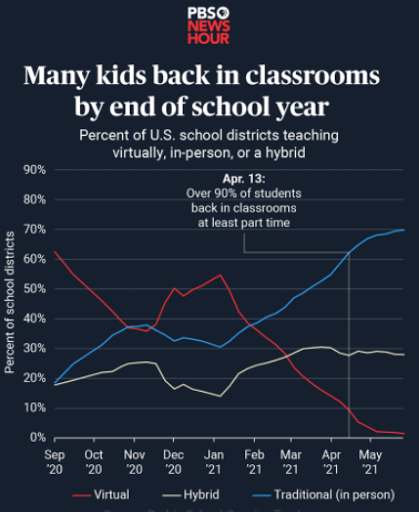 Local to Los Angeles County, where I live, we have a current epidemic that is far, far higher in several northern cities, Santa Clarita, Palmdale, Lancaster.  For example, Palmdale had 209 cases the past 2 weeks, whereas Santa Monica and Pacific Palisades, upscale Westside neighborhoods with roughly similar population, had only 16 cases.  I made notes and some graphics here.