On Monday, January 11, 2022, the MolDx MAC system held a contractor advisory meeting in which a half-dozen experts discussed uses of microbiology panel testing (respiratory, GI, meningitis, etc).  The discussion was somewhat extended and I don't have short bullet-point takeaways from it.   Panelists emphasized that different syndromes were different, different panels and settings were different, patients were individualized, etc.   At some point Noridian will post a transcript of the session. The MolDx system may be considering revising its policy (policies) for panel testing, which currently focus coverage on 5-pathogen-and-less panels.

The Novitas MAC has released a new policy on respiratory pathogen molecular testing. with a public meeting to be held on January 29, and a comment period open until February 27.

The coverage section is very concise.

This coverage section has the pro's and con's of 21st Century Cures reforms for LCD structure and process.  The LCD coverage section is supposed state what is covered, why, and when, and not need updating very often.   An attached billing article gives details such as covered CPT code numbers.

In this case, the coverage section is fairly ridiculous, not defining "timely result" and leaving to the reader to figure out when "clinical management results in an improved outcome" to allow even the 3-5 panel tests.

The LCD goes on when an extensive literature review and discussion, including a summary of guidelines.

Novitas held a contractor advisory committee public meeting on respiratory panels in June, 2019, which leaves an audio file and transcript - home page here.  In the LCD, they record CAC members were polled and responded the panels are accurate and may improve outcomes.  The advisory meeting was held long before the COVID pandemic.

The billing article lists a series of non-covered codes, including the standard codes for respiratory pathogens, 6-11 and 12-25 targets (87632, 87633) and a list of 7 non-covered PLA codes for large panels (larger than 5 targets, often around 20).

The article adds no more to the LCD's superficial rules that results must be timely and can improve patient care.

I've put the LCD, article, and 2019 transcript in one cloud zip file here.

Interestingly, these codes drop in Medicare utilization from 2018 to 2019.

Who Were the Leading Providers of 87633?  Mostly So Cal

Going back to CY2018, when there was $41M of spending on 87633 and $25M in California, the top providers (each with over $1M allowed) were mostly in Southern California. 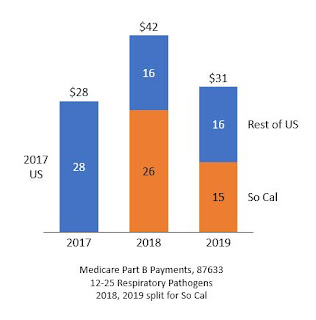