During the Trump administration, routine press releases from CMS have headlined with, or opened with, a touting of President Trump's leadership.

For example: in August, the Medicare Coverage for Innovative Technology (MCIT) policy was proposed "under President Trump's leadership" (here).   The leadership quote was raised from the lead, to the headline, when CMS wrote on the same topic in September (here). 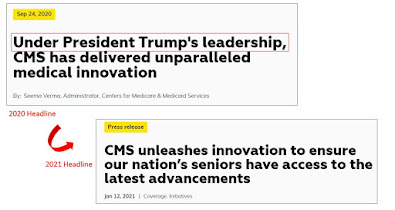 In remarks this week to ABC, HHS Secretary Alex Azar distanced himself by pointedly framing January 6 as, "The rhetoric last week was completely unacceptable."