Normal path for LCDs.  Generally, Medicare LCDs follow a predictable course.  They are posted in draft form; a public comment period ensues; and after 6-9 months they are published in final form.  Often, there are no edits between the draft and the final, although there can be significant ones at times.

Hectic path for some LCDs in 2020.  In the past several months of 2020, it's been more hectic and unpredictable in the MolDx program.

In May, the Noridian MAC - which processes most of the dollar volume of MolDx payments - declined to finalize two proposed MolDx LCDs, although it replaced the deleted draft LCDs with short "coverage articles" with the same effect (here).   This puts different MolDx MACs out of sync in terms of their LCD libraries, and for the first time.  It also makes it impossible to maintain a single "master edit file" across MolDx MACs, although having such a file is part of the MACs' statement of work.

In June, MolDx nationwide deleted an August 2019 proposed LCD for "combinatorial pharmacogenomics" (such as the Myriad Genesight test) although it consolidated some of the content into another LCD (here).

More news in early August.  According to a press release from MDxHealth, a Belgian company with a market cap of about $50M, MolDx has nationally deleted a proposed LCD from August 2019, DL38242 [cloud copy] which would have provided coverage for SelectMDx, a urine-based molecular test to help manage potential prostate cancer patients.

See Noridian's announcement of the draft LCD "retirement" here (cloud copy here).   See MDxHealth's initial 2019 press release on the proposed coverage here.  See MDxHealth's 2020 press release regarding the deletion here, company stating "following recent communications with Palmetto GBA related to the retirement of the previously issued draft LCD, the Company has been requested to submit an update to our technical assessment under the MolDx program."  See the company website here.

MolDx's Default Status is "Non-coverage."  Generally, when MolDx doesn't have an LCD with proactive coverage in place, services aren't covered, because MolDx has a "master LCD" that states no molecular tests are covered, until they have been reviewed and awarded coverage.  That LCD dates back to around 2013.  (See MolDx master LCD, L35025, in the cloud here.).  The legacy or grandfathered status of the "blanket non coverage" LCD L35025 is important, because under current Medicare program law and regulation* (see policy manual here, transmittal here, article here), LCDs have to provide a public explanation and review of evidence for their non-coverage decisions.  The master LCD has no discussion of the SelectMDx test or the reasons why it isn't covered.

MDxHealth garnered a new $15M investment round just a couple months ago (here). 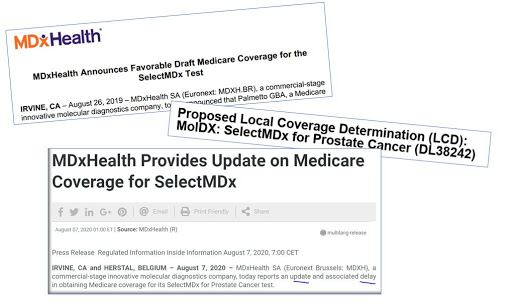