What Does the June 24 Executive Order on Price Transparency Actually Say?

Both the pre-publicity and most of the news items on the June 24, 2019 Executive Order on price transparency talked about "an executive order that will make doctors and hospitals publish their prices."    This made no sense - clearly, an Executive Order can't do this, no matter how many journalists say so.

Rather, the actual Executive Order is couched in request language - requesting HHS to do this, that, or something else, if it is possible, over some period of 90 or 180 days or longer.   Very few of the major journalistic sources on the E.O. actually linked to the White House document itself.  Once you get there, it's interesting.

It's also part of a wide Republican effort to take new approaches to health reform, and if you find the right sources, there's a lot of content there.  (See my May blog at LinkedIn on two recent and detail-packed Republican speeches here).   This Republican content is rarely elevated and summarized well.   Fox News doesn't do it, probably lacking the appetite for detail, and NYT and WaPo don't, either.   Nor can you turn to the health policy literature:  I was particularly struck a few days ago by a very poor summary of Republican plans inside a review article on Health Reform at the Annals of Internal Medicine (here).

It's not at all easy to get a good simultaneous overview of the 120-page HHS policy blueprint of 2018, a good overview of the new May 2019 Senate legislative language at 165-pages, or even a real grasp of the 1500-word June 24 E.O. from our major media or trade journal sources.

The actual E.O. is online here at the White House.  It's called "Improving Price and Quality Transparency in American Healthcare to Put Patients First."    Now you've got a link to it. 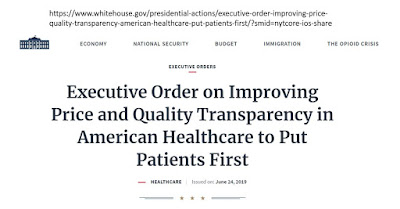 These documents, in particularly the June 24 one, actually have a lot of content.  Passages of the June 24 E.O. read like policy wonks writing for policy wonks (it's impossible to imagine the President quoting some of the sentences, for example).

A lot of this gets flagged in advance if you know where to look, such as a March 4 speech by senior White House advisor Joe Grogan to a hospital association; I made a full length transcript with annotations here.  Grogan pointed his audience to the 120 page HHS document cited above as being a continuing key guidance for executive branch plans, for example.  And his remarks from March 2019 clearly point forward to later Administration actions in May and June 2019.   (Short notes, with links, at LinkedIn here.)

In late May, a set of Republican proposes from the Senate largely got lost in news that they would reduce "surprise billing" in emergency rooms and the like.   That's part of it, but there's a lot more in the Senate proposals, including many passages about generic biologicals/biosimilars law [Fn3] and things like all payer claims databases.

In announcing the Lowering Healthcare Costs Act (LHHC Act) in May, Sen. Alexander said it hoped it could be moved to the floor and finalized in law this summer (here).

There's a whole zone of policy focused on All Payer Claims Databases.   (If I recall correctly, during the 2008 economic crisis, one shovel-ready grant under ARRA was for APCD).

The last I heard about APCD was the Supreme Court case that made them more difficult; Gobeille, 2016.  Here, here.   But the new legislative and E.O. efforts aim to circumvent what are seen as impediments raised by Gobeille.

People tweet about APCD (for example here and here).  There's an APCD Council here.  The National Council of State Legislatures has a highly informative webpage devoted to APCD here.   AHRQ has a webpage for APCD too, here.  There's a growing PubMed literature (Garvin et al., 2019, here.)   Anthem has an 18 page white paper on APCD here.

Some of the Republican health ideas are fairly straightforward to implement, and unlike say Medicare-for-All (M4A), fairly hard to argue against.   The Senate LHHC bill was supported by Ranking Member Murray (D-WA).   It's going to be hard for Dem's in the House or on the campaign trail to argue against price transparency or against surprise billing controls.   Al Franken exploited this strategic scenario in a 1999 book (FN4).

In conclusion, I'd recommended reading the actual several-page June 24 E.O. here and looking at the 3-page summary of the 165-page Senate legislation, here.

"The executive order calls for a rule-making process by federal agencies, which typically takes months or even years. The details of what information will have to be disclosed and how it will be made available to patients must be worked out as part of writing the regulations. That will involve a complex give-and-take with hospitals, insurers and others affected. Consumers will have to wait to see whether the results live up to the administration's promises."  Gold star for Fox; written by Andrew O'Reilly.

"The order itself does not immediately trigger changes in the health-care system. But it sets in motion several new rules HHS and other federal agencies will write and gives Trump a set of pro-consumer talking points in the first week after he formally announced his reelection campaign.
In a media briefing before Trump signed the order, senior administration officials said they had not decided how much detail would be required about the negotiated rates and that such fine print would be left to the Department of Health and Human Services, which is instructed to write new rules to carry out this and other aspects of the order."

Representative of some of the lower-voltage passages from June 24 E.O.:

"Within 180 days of the date of this order, the Secretary of Health and Human Services shall submit a report to the President on additional steps my Administration may take to implement the principles on surprise medical billing announced May 9."  For the May 9 event, see here.  I'm not a political expert, but the pop-up May 9 WH event on Surprise Billing seems to just jump by a few days bicameral Hill efforts on surprise billing (here).

Bach and Trusheim recently wrote about the doomed status of biosimilar competition, entry point here.   As Commissioner of FDA, and after, Scott Gottlieb talked about the problems of biosimilars competition, too.   The Senate 165-page draft bill contains many pages devoted to improvements in biosimilars law - as witness pages 31-64, they are trying to "get stuff done."

Al Franken, Why Not Me, 1999.  Here.  Franken's fictitious alter ego wins the 2000 presidential race by campaigning on a platform exclusively against high ATM fees.  All voters supported this, and no opponent could contradict it.  A platform of health reform primarily against surprise bills and for transparency follows a similar winning logic.

There are a number of industry comments coming in to Senate re: price transparency.  Many cite a 2015 short blog by FTC (Koslov & Jex), that price transparency can support collusion, here.   However that blog links to a 15 page memo here and to a March 2014 two day workshop with transcripts here.

For an interview with signing participant, economist Van Horn, here.

A KFF article in January 2019 argued that just putting spreadsheets of hospital prices online is confusing and unhelpful, here.

On June 24, there was a Republican-focused Op Ed on health reform in The Hill, but it seems to have been written before the June 24 E.O.   Here.

I noted an Annals of Internal Medicine recent review article in the body of the blog; the authors Woolhandler and Himmelstein also have a May 31 (e)/June 25 (paper) op ed in JAMA, here.

Abe Sutton, who's a few years out of a Poli Sci/Econ degree at U Penn (in 2014 he was President of its Undergrad Assembly) via McKinsey, is Health Advisor for the Domestic Policy Council, here.

The President made several comments in his June 24 signing speech that he was very proud of Right to Try legislation and that it was good for patients.

The President closed his spoken remarks with:  "I’m going to go and sign the executive order.  And if this is half as big as some people are saying it will be, it will be one of the biggest things ever done in this world, in this industry, in this profession."