Very Brief Blog: Original Sources for Surprise Billing aka Out of Network Legislation

Note: Since June, I've added a few updates inside this blog; for an August 12, 2019, article, HealthCare Dive, here.


The last few weeks there has been a flurry of bicameral (and bipartisan) movement on health legislation, with a showpiece topic being surprise-billing legislation.

Politicians and consumers don't want to be hit with $20,000 anesthesiologist bills out of network - especially when the next guy would be $1000 in-network.  But, the legislation can be thorny in that it imposes pricing rules or price caps that can seem arbitrary or unfair.  (To parody an old bit of doggerel about taxation: "Don't price cap-you, don't price-cap me: Price-cap that guy behind the tree.")

In addition, putting pricing rules or caps on out-of-network services can affect the way the next round of de novo in- and out-of-network negotiations between providers and insurers play out (aka game theory with new rules of the game.)   (For example, what doc would negotiate to an in network office visit at 80% Medicare with a 30% copay if the new law acted to fix payments to out-of-network providers at 125% Medicare and a 15% copay?)

Lab Industry Pulled Into the Discussion

The implications may be large for the lab industry, since a lot of lab claims may fall into out-of-network status.  There could also be requirements that physicians not refer to out-of-network providers, or penalties for doing so, and these could now come from law, rather than from local contracts and conventions.

Note, too, that from a P.R. perspective, one of the landmark media events in out of network billing was about a laboratory (the surprise bill was $17,000), a story that broke in February (e.g. NPR) and featured May 9 in a Presidential press conference May 9.

The House has focused two hearings specifically on surprise-billing legislation, with a 22 page draft bill HR861.

Meanwhile, the Senate has a multi-dimensional, 196-page health care bill which passed out of the HELP committee on June 26.  In S.1895, the first 20 pages or so are a surprise-billing law.

See a Zip file of the May 21 House Ways and Means testimony, here.  Website here.

Numerous health provider groups testified or submitted statements against the bills, generally liking the principle but not the execution.  For example, see the College of American Pathologist's six-page June 18 statement to HELP here.  "An inequitable payment formulate that would enrich health plans while undermining the economic viability of health care delivery...creating a clear economic incentive for health plans to further narrow their physician networks."


Who Spoke on Hill

At a glance, speakers with PDFs in the above ZIP files include:

If you work through the twenty or so PDFs from the various hearings, they clearly sort into two piles, payer side (AHIP, Pacific Business Group, ERIC or ERISA stakeholders), and provider side (AMA, AHA, etc).   Everybody starts by saying that surprise bills are bad, and patients should be protected by having only normal copays.  (Note that once patients are fixed to have  normal copays, the patient himself no longer has an incentive to be in or out of network!)   But then the debate is whether what IS paid, which is from an insurer since not from a patient, is paid at WHAT rate.   For example, will it be a binding arbitration rate, or 125% of Medicare, or median of that payer's contracts, or median of state database contracts, etc.

Another feature is that there are already some state laws in this area - California and New York and Texas being three of them - and there are grand arguments about pro's and con's in these comment letters.   See Commonwealth fund here, USC-Brookings here, Peterson-Kaiser here.

One term of art to learn is "baseball arbitration" which means an arbitration where each party proposes a price and the arbitrator chooses the most reasonable one.  In theory, this means no participant will bid crazy low or crazy high because the arbitrator will just circular-file it.
____


President Trump and Executive Order: May 9 and June 24

DJT: May 9, June 24.  President Trump's June 24 executive order focuses on price transparency per se but includes a request that HHS work on better rules and regulations for surprise billing, separate from the particular legislative efforts discussed above.  Here.

(Stating, "Within 180 days of the date of this order, the Secretary of Health and Human Services shall submit a report to the President on additional steps my Administration may take to implement the principles on surprise medical billing announced on May 9, 2019.")  The May 9 event was 40 minutes, 7200 words, although the second half merged into a wide-ranging press conference.

The May 9 speech remarks, "In my state of the Union address, I asked Congress to pass legislation to protect American patients.  For too long, surprise billing has been a tremendous problem in this country..."   I didn't see a specific reference to the idea of surprise billing in the SOTU 2019, though there was a sentence about price transparency in general.

The May 9 WH event contains the famous example of a doctor (Paul Davis) whose family member got a $17,850 bill for a $20 urine tox screen, which was an NPR story a few months early (here; it includes the bill.) 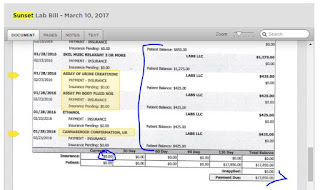 Continuing my frequent point that this administration flags its core interests multiple times and long in advance, CMS even included an RFI re out of network surprise billing in its May 7, 2018, inpatient rulemaking - a full year ago.  Here.

Sean Cavanaugh spoke for Aledade, which works with primary care physicians in ACO environments.  He was formerly Deputy Director of CMS CCMI and Director of CM, the Center for Medicare at CMS.

November 2019 - Article on how surprise billing legislators are reviewing the effects of a NY State law, here.

January 2020 - Thanks to David Lafferty a link on how consumers can help prevent debt from surprise bills, here.