In  the past several weeks, there have been an unusual flurry of articles, notices, and sign-on letters raising concern about the implementation of Medicare's March 2018 NCD covering the Foundation Medicine tumor gene panel test, and additional unexpected effects of that NCD.

FORCE - Facing Our Risk of Cancer Empowered - has released a web page about the topic now.  Find it here.


FORCE was among 60 signers of a letter of concern to CMS Administrator Seema Verma on January 31, 2019 (here).

If the NCD is used to restrict NGS testing to women with Stage 3-4 cancer, it has big impact.  Most women who have breast cancer and who qualify under Medicare LCDs (and NCCN guidelines) have Stage 1-2 cancer,  when the most preventive actions are possible.  As I noted on January 2, there is a highly disproportionate impact on Medicare beneficiaries of Ashkenazi origin (here). 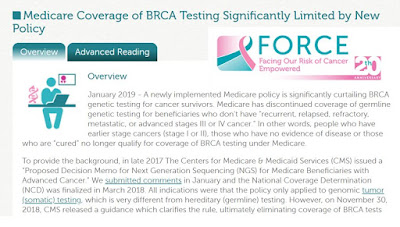 FORCE Submitted Comments in January 2018, Before NCD Was Finalized

FORCE submitted comments to CMS on January 17, 2018, before the NCD was finalized (here).  The letter describes "current Medicare policies for Germline testing" - e.g. LCDs  (some of almost ten years duration) in every state guaranteeing coverage of germline testing in women with a personal history of cancer and meeting additional NCCN criteria.  (Generally, the LCDs match NCCN criteria for patients with a personal cancer history.  NCCN has other criteria, not recognized yet by Medicare, for familial history without a personal history).

Remarks In Final NCD Clearly Pointed Away from Germline Testing

So far as I can tell, while statute (1862a) requires CMS to provide the public with its data sources and rationales, and answer public comments, there were no germline sources or rationales in the proposed NCD and no response to the FORCE public comments and similar public comments, except two.   The final NCD remarks that germline testing NCCN guidelines are out of scope (Daly, 2017), and remarks that the NCD does not apply to all NGS method tests, but only those for targeted therapeutics.   Both of these remarks are opposite to an interpretation that the NCD applies to germline testing or applies to all NGS method tests.

As discussed clearly by FORCE on its webpage, the status quo was disrupted by a CMS transmittal in November 2018, adding a remark not found in the final NCD, that no other testing by NGS methods was covered (regardless of purpose) if the patient had cancer.   See screen shot:

Note: At least on some browsers, this transmittal seemed to be variably accessible on February 20; it should be, here.

Myriad.  The issue was also discussed on Myriad's recent investor call, where the CEO said the chance of this CMS interpretation spreading to commercial payers was "zero."

(I think this supports my own general remark that the NCD is not reasonable - if the chance of any other informed body agreeing with it and following it is "zero.")


"The coverage group at CMS indicated in early January that it interprets the Foundation Medicine NCD, as limiting Medicare reimbursement of germline cancer testing to late stage cancer patients. Leading patient advocacy groups, professional societies, and industry groups, including Invitae, have expressed the view that this is a mistake.

We're optimistic that this will be resolved in a way that reflects the contribution of germline testing to cancer patients among the Medicare population."

"....We are along with the advocacy groups, all of the professional societies, most of the industry are working hard to explain to the folks that CMS as well as the legislative committees that have oversight responsibility that this is based on a misunderstanding, that really the utility of germline testing is to -- in cancer patients, is to identify those patients with the hereditary syndromes because they have the greatest risk of metastasis and recurrence.

So really the value in germline testing is primarily in the earlier stage patients and we think they -- this is just a misunderstanding and we're sure that given the opportunities to submit evidence, we and the rest of the community can submit plenty to convince them that this was a mistake and that in fact, along the lines of some of the research that [Chief Medical Officer Dr Nussbaum] outlined, if anything, coverage should moving in the other direction."