Genomeweb reports today that AMP has asked CMS to reconsider the pricing of new BRCA codes established through the 2018 summer comment and fall decision periods.
CMS has an ongoing and unchanged code for 81162, BRCA 1/2 full sequencing with dup del analysis.   AMA CPT 2019 institutes a new code system (largely developed by AMP or CAP) with new code 81163 for BRCA 1/2 sequencing alone, and 81164 for BRCA 1/2 dup del analysis alone.  Another is 81164 for BRCA 1 sequencing alone.

Principally, regarding CMS pricing of 81162, AMP argues that CMS acted inappropriately when it priced for sequencing BRCA 1 and separately for BRCA 2.  This yielded prices of several hundred dollars per gene.  However, AMP argues that labs run both genes together therefore a different, very large procedure crosswalk is more appropriate. This points to code 81408, $2000.

But this will yield other inconsistencies; for example, in next year in 2021 the composite code 81162 will pay only $1825, less than one of its components, if AMP's proposal is adopted.

In addition, the crosswalk code CMS used for BRCA2 sequencing was continuing code BRCA2 (81216, $185), which CMS used as a reference price for sequencing BRCA2, which seems clear enough.  AMP avoids this rabbit hole by simply stating that 81408, $2000, is the most direct single crosswalk.

The appeal issue will be an agenda item at the CMS summer new code pricing meeting, which typically occurs either circa June 30 or else after the July 4 holiday such as July 8-20.AMP also lodges a second appeal.   AMP argues for higher pricing of 81165, BRCA 1 sequencing alone, based on the concern that an exon count crosswalk to 81406 is too low because some exons are really big.   PAMA commercial payer data, as well as CMS data, indicates that individual codes like "BRCA 1 sequencing alone" are virtually never used. 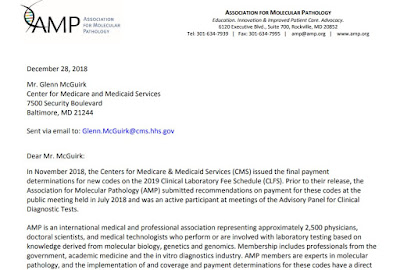